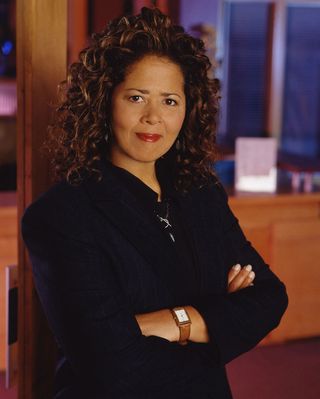 Anna Deavere Smith, a blazingly original theater artist and former MacArthur "genius" grant winner, has long been a teacher as well as a playwright/performer.  And now, as the first Stanford Distinguished Professor at the University of Miami for 2010-2011, she's bringing her engaging array of skills to UM's Gusman Concert Hall in Coral Gables for a one-night-only appearance.

At 7 p.m. on Monday, Sept. 13, Smith will present a performance/lecture titled The Changing Landscape of Doctor-Patient Relationships. A brilliant chameleon who builds her solo pieces from numerous interviews, absorbing her subjects' voices, body language and attitudes, Smith uses her documentary-style approach to create insightful, provocative theater.  Among her award-winning works are Fires in the Mirror and Twilight: Los Angeles 1992.  She created Let Me Down Easy, a searing look at the state of health care in the United States, in 2008.

Although she has an array of television and film credits (she's a regular on the Showtime series Nurse Jackie), Smith is no stranger to academia.  She is currently a professor at New York University's Tisch School of the Arts and taught drama at Stanford University from 1990 to 2000.

Tickets to her UM appearance are free, but registration is required.  For info and to register, click here.