The Off Broadway-style Silver Palm Awards, a three-year-old honor given out at the closing party of the yearly South Florida Theatre Festival, will honor actors both experienced and young, a pair of theater companies, a director, a playwright, a choreographer, a musical director, a set designer and a pair of artists who made a comedy horror musical look special. 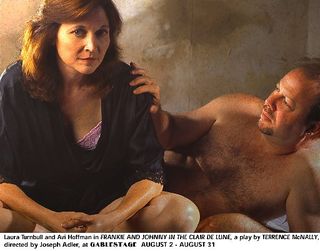 Married actors Laura Turnbull and Avi Hoffman will get Silver Palms for their separate achievements -- she for her work in Mosaic's Rock 'n' Roll, New Theatre's Equus, the Caldwell Theatre Company's Distracted and City Theatre's Summer Shorts/undershorts; he for Florida Stage's Two Jews Walk Into a War and GableStage's The Quarrel.

Other Silver Palm honorees are the Caldwell (for its concert versions of Stephen Sondheim's Into the Woods and Sunday in the Park with George), New Theatre (for 25 years of new play production), J. Barry Lewis (for directing Palm Beach Dramaworks' Three Tall Women and Copenhagen), Christopher Demos-Brown (for his play When the Sun Shone Brighter at Florida Stage), Chrissi Ardito (for her Stage Door choreography of Bubbling Brown Sugar, The Drowsy Chaperone and Mack & Mabel, and for the Promethean Theatre's Evil Dead: The Musical), Eric Alsford (for his musical direction of Actors' Playhouse's Miss Saigon), Tim Connelly (for his Blasted set at GableStage), Taso Stavrakis (for his Evil Dead special effects at Promethean) and Tyler Smith (Evil Dead props).

The recipients will party and take home their awards on Monday, Oct. 25, from 7 to 11 p.m. at the Green Room behind Fort Lauderdale's Revolution Live, 100 SW Third Ave., Fort Lauderdale.  Admission is $25, but members of the Theatre League of South Florida get in free. Call League executive director Andie Arthur at 954-557-0778 to make a reservation.