Though it's a quiet weekend in theater as far as openings go, two companies have scheduled readings to fill the gap. 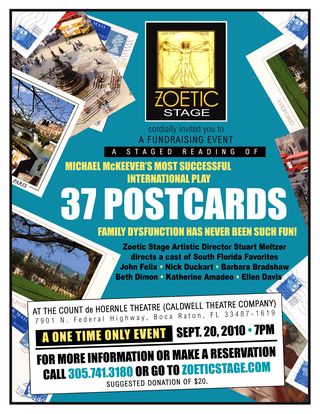 Zoetic Stage is holding its third fundraiser at 7 p.m. Monday, still getting together the dough for its inaugural production -- the world premiere of Michael McKeever's South Beach Babylon -- at Miami's Adrienne Arsht Center for the Performing Arts Dec. 2-12.

Also on the reading front, Conundrum Stages has postponed its scheduled reading of James Baldwin's Amen Corner, which had been planned for 2 p.m. Saturday. For info, e-mail conundrumstages@ymail.com.