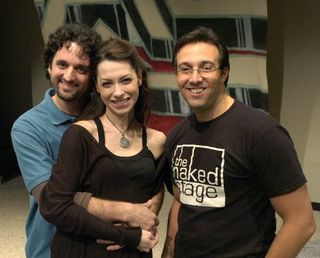 The fourth edition of Naked Stage's 24-Hour Theatre Project is history, having played to a sizable audience of people who were appreciative, giddy and/or exhausted on Monday at the home of Boca Raton's Caldwell Theatre Company.

Katherine Amadeo, now Naked Stage's artistic director (seen in this photo from the first 24-Hour event with company co-founders Antonio Amadeo, left, and John Manzelli), ran the complex creative benefit with finesse.  Nobody got hurt, though actor Patti Gardner almost did when a park bench threatened to roll out from under her.  The eight short written-overnight plays were decent to delicious, their sleepless authors in varying states of near collapse.  As always, the quality of the work that South Florida's acting and directing talent pulled off in a mere 12 hours felt close to miraculous.

My favorites were the three funniest plays. Tony Finstrom's program-launching Henry VIII's Mail Order Bride featured Stephen G. Anthony as a disabled former TV star reading opposite two young actresses (the equally hilarious Lindsey Forgey and Julie Kleiner) auditioning for a play about Henry and fourth wife Anne of Cleves.  With great work from Amy McKenna as a lust-filled playwright-director and a cheating (but funny) cameo from director Avi Hoffman as her kvetching elderly hubby, Finstrom's bubbly play got the evening off to a wacky start.

The second half of the program got off to a similarly buoyant start with Andrew Rosendorf's Dinner With Dracula, in which the crooning Count (Christopher A. Kent) lures a Facebook innocent (Andrea Conte) to his castle for a "bite," much to the dismay of his smitten housekeeper (Laura Hodos).  "Dinner" turns out to be a very much alive out-of-work actress, Lela Elam, who offers a wildly funny, profane and truth-filled rant about what it's like to be...Lela Elam.  Under Barbara Bradshaw's direction, Dinner was a stitch.

Unsurprisingly, the most artfully hilarious piece came from one of the region's most successful playwrights, Michael McKeever.  OMG...ROTFLMAO featured an ebullient Karen Stephens speaking that IM shorthand to share news of her engagement with her uncomprehending (and deadpan funny) best pal (Nancy Barnett); her friend's almost-grown kids  (Adam Simpson and Carrie Santana) also figured into the Internet shenanigans.  McKeever, whose sizable collection of funny short plays has helped raised start-up money for the new Zoetic Stage (he's one of its founders), is a real master of the form, here layering abundant laughs atop a cautionary tale. Director Adalberto Acevedo and a cast that nailed the prolific playwright's latest took a happy audience to a place just shy of ROTFLMAO.

The other plays of 24 -- Andie Arthur's A Rebel's Guide to (Utter) Compliance, David Michael Sirois' Amputease, Lucas Leyva's Fardel's Bear, Christopher Demos-Brown's A Storybook Funeral and Juan C. Sanchez's Armed & Hammered -- risked more stylistically and thematically but didn't quite fly.  Even so, the kind of pressure-cooker creativity that Naked Stage's most theatrical of benefits brings out remains an impressive delight. Can't wait for next time.