'Spacey' gets a name change 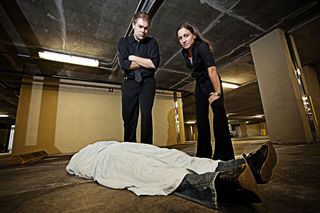 The Broward Center is presenting the United States premiere of an award-winning Canadian fringe festival comedy this weekend.  But if you were planning on seeing Killing Kevin Spacey by Elan Wolf Fabiarz and Cory Terry, you should know that now you'll be seeing Channeling Kevin Spacey.  Seems the Oscar winner wasn't thrilled with the original title, and who can blame him?  Haven't these guys seen The Fan?

In any case, the play isn't about what its original title implied (really, don't pay any attention to the photo).  The comedy is about a movie fanatic who thinks his dull life is a little too much like the characters Spacey plays in movies, so he decides to inject a little Al Pacino into his day-to-day, with crazy results.

Scott Douglas Wilson, Monica Mercedes Garcia and Arick Fudall appear in the show, which has performances at 8 p.m. Friday-Saturday in the Amaturo Theater at the center, 201 SW Fifth Ave., Fort Lauderdale. Tickets are $35.  For info, call the box office at 954-462-0222 or visit the Broward Center web site.