« 'Spacey' gets a name change | Main | 'Something' alternative this way comes » 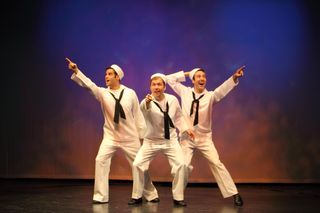 Derelle Bunn and David Torres, co-producers and founders of the busy Broward Stage Door Theatre in Coral Springs, may soon have much more on their professional plates.  At its Wednesday meeting, the Miami Beach City Commission voted to enter into negotiations with Stage Door to operate the Byron Carlyle Theatre at 500 71st St.  Bunn and Torres, who have been working on the southward expansion of their operations since April, are thrilled.

"We would do the same kinds of things we do here," says Bunn, whose theater is opening the musical On the Town this weekend, complementing the ongoing production of Steel Magnolias.  "It would be predominantly musicals.  We'd run year-round, with a couple of dark weeks between shows."

Bunn says she and Torres will meet with Miami Beach reps Nov. 10 to negotiate a lease, hoping that the terms will be approved at the commission's end-of-November meeting.  She wants to start presenting theater on Miami Beach in January or February, working around some shows already booked into the Byron Carlyle in January.

This isn't the first time that Bunn and Torres, who launched Stage Door in 1994, would be operating a theater away from their two-theater Coral Springs base; the two ran the 26th Street Theatre in Wilton Manors for seven years.  The deal that the two are negotiating calls for Stage Door to run the Byron Carlyle for five years, with an option to renew for another five.

The expansion is, obviously, a risk.  The not-for-profit theater's current $1.5 million budget will have to grow, as will its staff.  But Bunn says she and Torres are up for the challenge.

"We're really excited," she says.  "It's a great opportunity in a beautiful area that the city is trying to revitalize, one with a great audience base."