« Tarell McCraney gives back | Main | Putting the 'fun' in fundraiser » Though the arts have been a year-round thing in Florida for a long, long time -- don't call us snowbirds -- it's easy to tell that the Season (with a capital "S") has begun once the calendar has flipped from September to October.  I know this because (in addition to working more than a month without an entire day off) I had an extraordinary three days last week, days and evenings full of moving arts experiences that made me love my job even more. If that's possible.

First I zipped across Alligator Alley to Sarasota to take in several performances at the second Ringling International Arts Festival.  If you've not been to the Ringling Museum of Art (and if not, whynot?), you've missed a Florida treasure on 66 acres by Sarasota Bay.  In addition to the museum, with its collection of rare Old Master paintings (plus modern and contemporary art), you'll find Ca d'Zan (the former home of circus magnate John Ringling and his wife Mable), the Circus Museum, the historic Asolo Theater (a gorgeous restored 18th century Italian theater inside the museum's Visitors' Center) and the FSU Center for the Performing Arts (home to the Asolo Repertory Theatre, where the new musical Bonnie & Clyde  will kick off the season Nov. 16-Dec. 19). 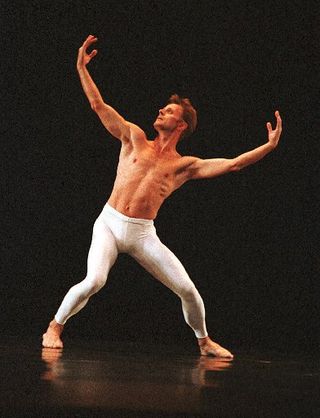 On the festival's kickoff Night of Premieres -- violinist Tim Fain playing a new piece by Philip Glass, the Czech Forman Brothers doing a snazzy operatic puppet show, the debut of Pulitzer Prize winner Nilo Cruz's newest play Hurricane, and the night's hottest ticket, solo pieces danced by Mikhail Baryshnikov and David Neumann -- I chose the Cruz's Hurricane, a still-evolving piece about a Caribbean family in crisis after a storm.  It is always a thrill to be part of a first audience, even more so if the man responsible for it all happens to be a Miamian and the first Latino winner of the drama Pulitzer.  And if you can talk to him before and after, which is one of the bonuses of hanging out at a festival.

The next afternoon, I saw Baryshnikov (whose Manhattan-based Baryshnikov Arts Center copresents the festival with the Ringling) and Neumann (a witty, intriguing dancer-choreographer) dance their solos program.  I had seen the younger Baryshnikov (that's him in the photo) dance at Jackie Gleason Theater almost 30 years ago, when his then-girlfriend Jessica Lange was pregnant with their daughter Aleksandra (I remember because Lange and I both visited the ladies' room at intermission).  But to see one of the world's great dancers, now 62, perform again was so moving that I nearly got teary -- particularly as he danced the program's final solo, Benjamin Millepied's Years Later.  Dancing on a bare stage as black-and-white film of a 16-year-old, Baryshnikov dazzled behind him, the mature dancer still thrilled.  He remains a superb actor-dancer capable of communicating emotion -- resignation, acceptance, inspiration -- with the smallest movements and experience-honed technique.   And (thanks to that special festival mixing-and-mingling thing) Baryshnikov and I were part of the same audience for the Forman Brothers' Opera Baroque. 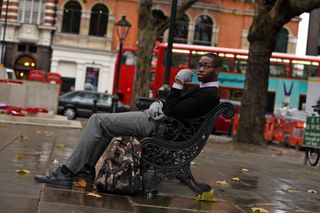 On Friday, it was back across Alligator Alley and down to Miami to catch playwright Tarell Alvin McCraney's birthday gift to his high school alma mater, the New World School of the Arts.  About to turn 30 (which he did last Sunday), McCraney decided to throw a fundraiser to help graduating seniors travel to the auditions required for college and acting-program admissions.  The result was both a financial success (the event raised $5,380) and one of the most dramatically potent play readings I've ever attended.

Reading scenes from all three of his breakthrough Brother/Sister Plays -- In the Red and Brown Water, The Brothers Size and Marcus; or the Secret of Sweet-- McCraney and actors Glenn Davis (whose theater credits include productions at Canada's Stratford Festival, Chicago's Steppenwolf and Los Angeles' Mark Taper Forum) and Sterling Brown (a theater, movie and TV veteran currently playing Dr. Roland Burton on the series Army Wives) brought the excerpts to vivid life.  McCraney, a fine actor (though he's way too busy as a playwright to perform any more), was so intense and tormented during a Brothers Size speech that he brought the audience -- and himself -- to tears.  The taste of his talent made his listeners impatient for next summer, when GableStage will present the South Florida debut of The Brothers Size, with McCraney directing.

The season marches on with opening after opening: Dreamgirls tonight at the Adrienne Arsht Center, A Behanding in Spokane Saturday at GableStage, the world premiere of Cane at Florida Stage Oct. 29, a rare production of No Exit by The Naked Stage, also Oct. 29.  And after last week's extraordinary collection of performances, I can't wait.