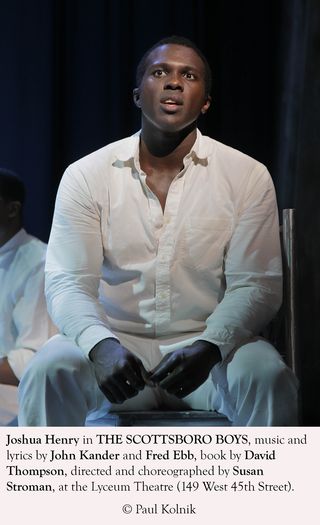 Joshua Henry hasn't been out of the University of Miami all that long -- he graduated in 2006 -- but the 26-year-old actor is forging an ascendant career.  He played the boyfriend of Oscar winner Jennifer Hudson in the first Sex and the City Movie, was part of the ensemble (and understudied the leading role of Benny) in the Tony Award-winning musical In the Heights, and got the showy role of the buff military recruiter in American Idiot.

But on Sunday at Broadway's Lyceum Theatre, Henry's life in the theater jumps to a whole new level with the opening of The Scottsboro Boys, the final musical by the team that wrote the edgy scores for Cabaret and Chicago, John Kander and Fred Ebb.

Henry stars as Haywood Patterson, one of nine young black men falsely accused of raping two white women aboard a train in 1931.  The case of the "Scottsboro Boys," as the nine were called (Scottsboro was the Alabama town in which they were first tried, in front of an all-white jury after being held incommunicado), became both infamous and precedent-setting, reaching the U.S. Supreme Court.  Nonetheless, despite the fact that one of the defendants' two accusers recanted and said the rapes hadn't happened. Patterson was convicted in four separate trials, sentenced to death after each of the first three.

That's plenty of real-life drama, but Kander and Ebb (plus playwright David Thompson) take The Scottsboro Boys into another realm by styling the story as a minstrel show.  Tony Award winner Susan Stroman is the director and choreographer of a piece that composer Kander saw through to completion the 2004 death of his longtime lyricist-collaborator Ebb.