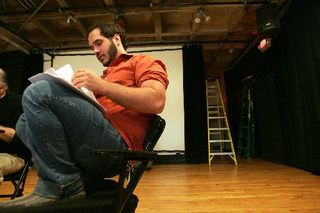 Marco Ramirez, the South Florida playwright who's currently a writer on the FX television series Sons of Anarchy, is no stranger to the Humana Festival of New American Plays, that annual spring gathering at Actors Theatre of Louisville (ATL) that remains one of the top new play showcases in American theater.  He has had two short plays -- I Am Not Batman and 3:59 a.m.: a drag race for two actors -- produced during past festivals, and both won him the prestigious  Heideman Award.

ATL has just unveiled the lineup for its 35th annual Humana Fest, which runs Feb. 27-April 17, and Ramirez is part of it.  Along with playwrights Dan Dietz, Jennifer Haley, Allison Moore and A. Rey Patamat, he has been commissioned to write a piece titled The End for ATL's 22-actor apprentice company.  Thematically, the piece will explore the apocalypse and what might come after.

Also part of the 2011 Humana Fest are six full-length world premiere plays: Adam Rapp's The Edge of Our Bodies (about a 16-year-old on the way to New York to share big news with her boyfriend), Peter Sinnn Nachtrieb's BOB (about the life journey of a kid born in a White Castle bathroom), Anne Washburn's A Devil at Noon (a "trippy" play about living in the world of the imagination), Jordan Harrison's Maple and Vine  (about two people who give themselves over to 1950s reenactors), Molly Smith Metzler's Elemeno Pea (about sisters whose lives have sharply diverged) and Patamat's Edith Can Shoot Things and Hit Them (about an isolated brother and sister).  A program of 10-minute plays will include Marc Bamuthi Joseph's Chicago, Sudan.

At special getaway weekends for locals, college students and theater professionals, you can see all the plays in just three days (with the exception of the 10-minute program, which is presented April 2-3 only).   Single tickets start at $23, and they go on sale Friday.  For info, visit the ATL web site.