'Something' alternative this way comes 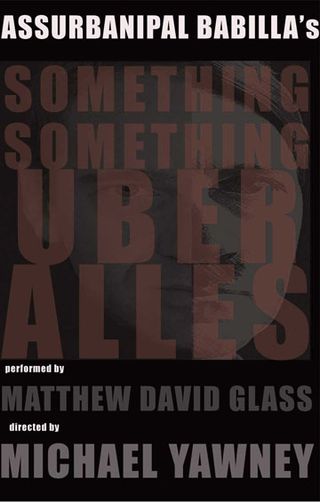 Exiled Iranian playwright Assurbanipal Babilla creates the kinds of plays that, were it not for the passion of a director like Michael Yawney, would probably never see the lights of a stage in South Florida.  Alternative, wildly risky theater is a rare thing in these parts.

But beginning Friday and running through Nov. 21, Yawney and performer Matthew Glass will take audiences into Babilla's world with their production of Something Something Uber Alles at Miami Dade College's North Campus.  Be prepared.

The play is a dark comedy about what happens when a regular guy figures out he's a Hitler lookalike.  A pair of gay pastry chefs take him to the underground "cathedral" of a Hitler-worshipping cult and proceed to idolize him.

Yawney and Glass previously worked together on the Camposition productions of The BugChasers and Yawney's 1,000 Homosexuals.  And Yawney earlier directed another Babilla play -- Three Angels Dancing on a Needle -- here.