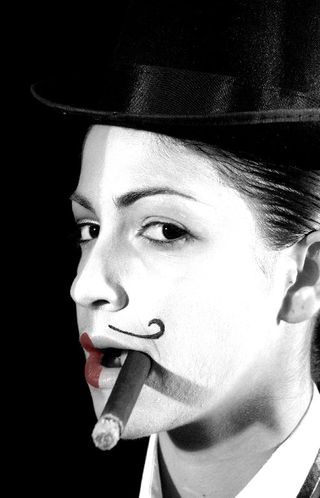 Shira Abergel, like all of the drama majors in the college program at Miami's New World School of the Arts, had to create and perform a solo show before graduating in 2009.  On Monday, Abergel gives her show -- Nictor/Nictoria -- its professional debut in a one-night-only performance at GableStage.  It's a showcase for her talent and creativity, for sure, but she's doing it to benefit a group of her classmates, the New World grads involved in the year-old State Theatre Project.

Led by artistic director David Hemphill, the company has presented two editions of the Living Newspaper (modeled on a similar topical roundup done during the Depression by the Federal Theatre Project) and presented the original short-play collection Beer & Cigarettes in a Coconut Grove bar.

In a week, on Jan. 13, the company opens its first full-length production:  Michael Vukadinovich's Billboard, a darkly funny, observant play about an in-debt college grad who sees salvation in getting a corporate logo tattooed on his forehead.  Billboard will run at 8 p.m. Thursday-Saturday from Jan. 13-22 in the Pelican Theatre on the Barry University campus, 11300 NE Second Ave., Miami Shores.  And proceeds from Abergel's show will help get the larger play on.