Lawrence Toppall's Mazel Musicals and the Broward Center for the Performing Arts are pairing for two series at the new Aventura Arts & Cultural Center this season.  The first, which begins at 8 tonight, is dubbed the Melodies and Memories Series.  Directed and conceived by Barry Levitt, who was once the man behind the 92nd Street Y's Lyrics and Lyricists Series in New York, the Aventura series focuses mainly on three great Broadway composers, with some movie music at its end.

First up, from tonight through Sunday, is Say it With Music: The Songs of Irving Berlin featuring Judy Scott.  Also on the series are Time After Time: The Songs of Jule Styne (Feb. 9-13), A Grand Tour: The Songs of Jerry Herman (March 9-13) and The Night Is Filled with Music: The Music of the RKO Pictures Era (April 13-17).  Performances are 8 p.m. Wednesday-Saturday, 7 p.m. Sunday, 2 p.m. Saturday-Sunday.  Admission to each show is $32. 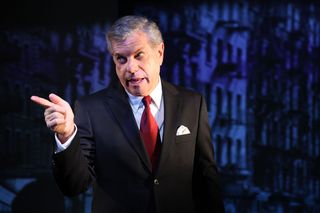 Next week brings the Double Chai Theatrical Series, kicking off with Mike Burstyn in Lansky, as in mob financier Meyer Lansky. Burstyn earned an Outer Critics Circle Award nomination for playing the notorious mobster Off-Broadway in 2009. The solo show, by Richard Krevolin and Joseph Bologna, is set in Lansky's Miami Beach home.