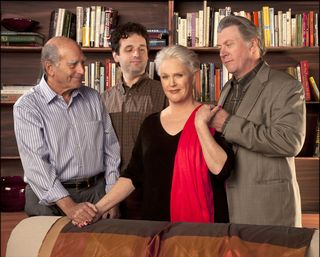 Hot stuff indeed. Jane Prowse's A Round-Heeled Woman, the GableStage production starring Burn Noticeregular Sharon Gless as a woman on a journey of sexual rediscovery, has been selling out the theater's 150-seat space again and again.  The show is such a hot ticket that, after adding four performances to the play's regular run, artistic director Joseph Adler has just announced a week-long extension with seven added shows.  The play, which was to have ended Jan. 30, will now run through Feb. 6, with final-week performances at 8 p.m. Wednesday-Saturday, 7 p.m. Sunday and 2 p.m. Saturday-Sunday.

Regular theatergoers aren't the only folks warming to Gless' glowing performance as Jane Juska, the retired teacher who decided to end three decades of celibacy at 66 by placing a frank personals in the New York Review of Books.  Adler says Rosie O'Donnell has already been to see her friend in the play.  And on Friday, with the real Jane Juska in attendance, famed actress-director Liv Ullmann came to see it.

"I introduced her after the play ended, and I wish I had a picture of Sharon's face," Adler said Monday.

Because Gless has to return to shooting Burn Notice and many of her five fellow cast members have other commitments, A Round-Heeled Woman will definitely close Feb. 6.  But its South Florida success has undoubtedly strengthened the play's future prospects.

GableStage is located in the Biltmore Hotel, 1200 Anastasia Ave., Coral Gables. For info on the added week, call the box office at 305-445-1119 or visit the theater's web site.