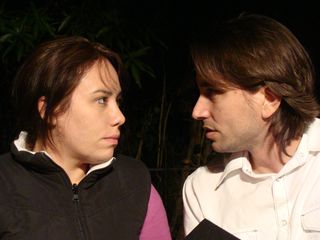 Melissa Almaguer and Ivan Lopez met as theater students at Florida International University.  After professional detours -- she to the PlayGround Theatre and the Jesus Quintero Studio, he to an MFA and theater work in New York -- the two have come together again to form a new company, White Rose Miami.

They're launching White Rose at 8 p.m. Friday with a production of David Auburn's Pulitzer Prize-winning Proof, an absorbing and surprising play about a young woman who abandoned her dreams to care for her math genius father as he slips ever deeper into mental illness.  Also in the cast are Christina Perdomo-Fernandez and Wayne Robinson Jr.  Almaguer is directing, Nicole Quintana is doing the set, and Carbonell Award winner Sevim Abaza is creating the lighting.

What's unusual about the production is that Almaguer and Lopez are taking it outside.  Proof is set on a porch, so they're performing it on a porch at the JQ Studio, 9001 NE Third Ave., Miami.  Now, the play's porch is a chilly one outside Chicago, and even with South Florida's recent run of cool weather a true-to-life frostiness is unlikely.  But Lopez and Almaguer get points for daring to be different.