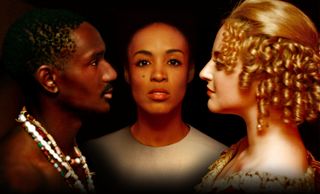 The Arquitectonica-designed South Miami-Dade Cultural Arts Center in Cutler Bay hasn't even opened yet, but news of one of its first theatrical offerings has already arrived.  Sarasota's Asolo Repertory Theatre will bring its production of  Pulitzer Prize winner Lynn Nottage's Las Meninas to the center's 966-seat South Florida theater after its March 18-May 15 Asolo run.

Inspired by the true story of an illicit romance between French Queen Marie-Thérèse and Nabo Sensugali, an African dwarf who was her servant, Las Meninas considers whether the mysterious Black Nun of Moret was actually the product of the affair.  It is set in the court of King Louis XIV and takes its title from the 17th century Diego Velázquez painting.  And it is, say both Nottage and Asolo's Producing Artistic Director Michael Donald Edwards, a piece that's full of humor.

Edwards, who directed the play's world premiere at San Jose Rep in 2002, says, "We are mounting only the second professional production of this important and largely unknown great American play, by a playwright who over the course of the last decade has become one of the most celebrated living theater artists...We are also thrilled to be able to take this production to Miami and share it with even more people through this new...collaboration."

The play has a cast of 15, including three resident company members and two guest artists.  Edwards anticipates bringing the majority of the actors in for the Miami-Dade run, perhaps adding two University of Miami students to the company.

The play' will have a short run at Miami-Dade's new $38 million facility, from May 20-22, as part of the center's "soft" opening (the official opening will be in October).  But the Asolo's announcement adds that the company hopes the run of Las Meninas will "foster a further artistic exchange between the two cities and the two organizations, and lead to more projects."

"I've been going to Sarasota for the past five years, and once I met Michael, this took off," he says.  "Part of the reason we're bringing in Las Meninas is to introduce the Asolo to the community, demonstrate the quality of their work and establish the boutique style of theater that will happen at the center."

Fliss adds, "I hope that this will lead to further collaboration.  Part of the conversation is developing material that will work in Sarasota and Miami."

For more information on the Sarasota run of Las Meninas, call the box office at 1-800-361-8388 or visit the Asolo Rep web site.

(Photo of Will LIttle, Devereau Chumrau and Lindsay Marie Tierce in Las Meninas by Scott Braun.)