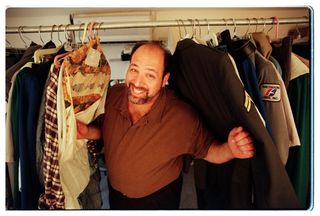 Multitasking Actors' Playhouse artistic director David Arisco, deep into rehearsals for Tracy Letts' Pulitzer Prize-winning August: Osage County (which opens next week), has found time to finalize most of the Coral Gables company's 2011-2012 season. And he'll be a big part of it -- sans his trademark beard, we presume.

The big-deal musical that will kick off next season is Hairspray, the Broadway smash inspired by John Waters' quirky 1988 movie.  And Arisco, who was last onstage at his theater in 2004 starring as Tevye in Fiddler on the Roof, will play zaftig mama Edna Turnblad in the musical about bullying, prejudice and dance-crazy teens in 1962 Baltimore.  Hairspray will run Oct. 12-Nov. 13.

Subscriptions for the new season range from $185 for preview performances to $435 for the gala opening nights.  Actors' Playhouse is in the Miracle Theatre at 280 Miracle Mile, Coral Gables.  For info, call 305-444-9293 or visit the theater's web site.

Boca Raton's Caldwell Theatre Company has also just announced three-fourths of its next season.  The lineup begins with Amy Herzog's After the Revolution, a play about three generations of a radical leftist family, Oct. 16-Nov. 20. After a to-be-announced show Jan. 8-Feb. 12, the theater is producing the Tony Award-winnning Cy Coleman musical City of Angels Feb. 26-April 1.  The season ends with the world premiere of Our Lady of Allapatta by Miami playwright Christopher Demos-Brown April 15-May 20, 2012.