The sounds of great Broadway composers -- Jerry Herman and the Gershwin brothers, George and Ira -- will fill the Aventura Arts & Cultural Center and Fort Lauderdale's Parker Playhouse through Sunday.

First up is A Grand Tour: The Songs of Jerry Herman opening tonight at 8 in Aventura.  Part of the center's Melodies and Memories series, the show features Broadway performer Sal Viviano, guest starring alongside South Florida singer-actors.  The University of Miami grad and namesake of the school's Jerry Herman Ring Theatre is the only composer-lyricist to have had three musicals that ran more than 1,500 consecutive performances.  From his smash hits, which include Mame, La Cage aux Folles and Hello, Dolly, the cast will sing everything from the rousing Before the Parade Passes By and The Best of Times Is Now to the pensive If He Walked Into My Life and Time Heals Everything. 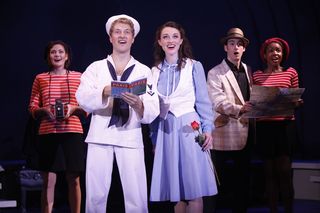 Beginning Thursday, the national tour of S'Wonderful brings the music of George and Ira Gershwin to the stage of the Parker Playhouse.  Through five "mini-musicals," the revue takes theatergoers from New York in 1916 to Paris in the '30s, Hollywood in the '40s, New Orleans in the '50s to the present day.  Songs in the show include Someone To Watch Over Me, Rhapsody in Blue, Shall We Dance and Let's Call the Whole Thing Off.