« A musical, a play and new works in bloom | Main | 'Memphis' moves from stage to screen » 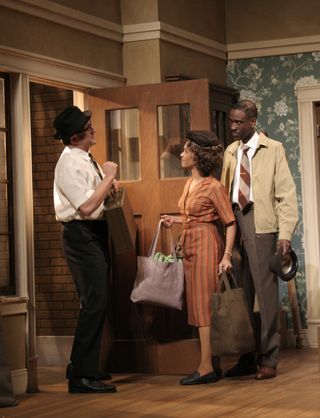 And the winner of the 2011 Pulitzer Prize for drama is....Clybourne Park by Bruce Norris.  Sound familiar?  If you happened to catch the Caldwell Theatre Company's dazzling January production of the play in Boca Raton, it sure does.

Seeing a Pulitzer-honored play in South Florida beforeit wins drama's top prize is, it goes without saying, an uncommon experience. Yes, that happened in 2002 when Coral Gables' New Theatre premiered a Nilo Cruz play it had commissioned -- Anna in the Tropics -- and the play went on to win the 2003 drama Pulitzer, altering the Cuban-born, Miami-raised playwright's life.  But it's usually the other way around:  a play wins the Pulitzer, then South Florida theaters start competing for the rights.

So a big bravo to Caldwell artistic director Clive Cholerton for recognizing a great, provocative play about the tenaciousness of racism from the time of A Raisin in the Sun to today.  Cholerton and a strong cast put together a memorable, unsettling interpretation of Norris' challenging script, a play that uses both drama and deliberately disturbing comedy to make its points.  As I wrote in my Miami Herald review, Clybourne Park is "the kind of play that challenge-hungry director, actors and audiences adore." Add the Pulitzer jury to that list.

Norris, who has a long history as an actor and playwright with Chicago's Steppenwolf Theatre Company (much like fellow Pulitzer winner Tracy Letts), now lives in New York, where Clybourne Park had its January 2010 world premiere at Playwrights Horizons.  He has already won several major drama awards, but the Pulitzer opens the floodgate of opportunities like no other prize.  This smart, youthful-looking provocateur turns 51 next month.  He's seasoned, edgy and outspoken. Inevitably, movie and TV producers will come calling. But I'm not really worried that Norris will abandon writing plays.  As he said in a New York Magazine piece during the New York run of Clybourne Park, "...I wouldn’t want someone to just wipe their ass with the script I’ve written.”

Steppenwolf, Norris' former theatrical "home," had already announced plans to begin its 2001-2012 season with Clybourne Park. With the added cachet of the Pulitzer (not to mention the play's Chicago setting), that production should be a big draw. But South Florida theater fans can, for a change, feel a little smug. Thanks to the Caldwell, we got it first.