'Memphis' moves from stage to screen 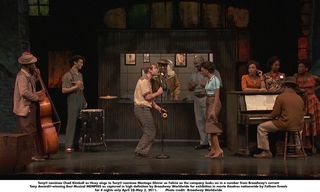 Memphis, with a book by Joe DiPietro and score by David Bryan, won the Tony Award as best musical almost a year ago.  It's still going strong on Broadway, and it will launch a national tour -- in Memphis, where else? -- in October.  But you don't have to go to New York or wait 'til the show makes its way to South Florida to see it.

National CineMedia Fathom and Broadway Worldwide are bringing four showings of an HD version of Memphis to more than 530 movie screens around the United States, starting this Thursday and ending May 3.  And many of those screens are in South Florida.

Much like the Metropolitan Opera's Fathom moviecasts, Memphis will bring its tale of a white DJ who falls in love with a powerful black singer in segregated 1950s Memphis to theater fans who don't mind paying $20 -- more than the price of a movie ticket, but considerably less than the charge for seeing the live show on Broadway -- for a visual experience that is a hybrid of film and theater.  And you'll get to see original stars Chad Kimball and Montego Glover do their dazzling thing.

Memphis is one of the earliest splashes in a gathering wave of stage-to-screen experiences.  This is not, it should be emphasized, a movie musical based on a Broadway hit, ala Chicago or Hairspray. Those are thoroughly reworked, recast and shot as movies. This Memphis is an HD version of the show as performed on Broadway.  Which raises the question:  Is it theater? A movie? Or that hybrid?

I vote hybrid.  Before writing a feature story on The House Theatre of Chicago's The Sparrow, which winds up its run in the Carnival Studio Theater at Miami's Adrienne Arsht Center for the Performing Arts this weekend, I watched a DVD of the piece shot during a Chicago performance.  Last Saturday, I went to see a live performance of it at the Arsht.  For me, that was a far superior experience -- more involving, more exciting, much more moving.  Part of the theatrical experience is the emotional give-and-take between actors and audiences, something that cannot happen in a movie theater, regardless of how strongly a moviegoer reacts to what he or she is watching.

But love it or not, the wave is coming, led by Memphis.  Screenings at various theaters are at 7:30 p.m. Thursday, Saturday and May 3, and at 12:30 p.m. on Sunday.  For a list of theaters and to buy advance tickets, visit the Fathom Events web site.