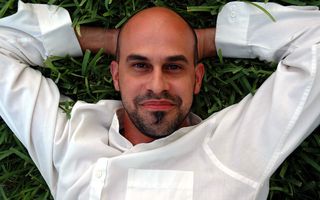 South Florida's theaters are continuing to roll out their 2011-2012 lineups, and now it's New Theatre's turn.  Artistic director Ricky J. Martinez has just announced the company's 26th anniversary season, a mix of summer Shakespeare and world premieres, one a commission from a face quite familiar to New Theatre's patrons.

This year's end-of-summer Shakespearean drama is Henry V, which will run Aug. 26-Sept. 11.  Adapted and directed by Ronald Mangravite, the history play focuses on the king's war with France.

Martinez kicks off the new-work part of his upcoming season with the National New Play Network "rolling world premiere" of A. Rey Pamatmat's Edith Can Shoot Things and Hit Them.  Running Oct. 14-30, the play is about a trio of on-their-own teens who face a crisis after one shoots something she shouldn't.  Twain and Shaw Do Lunch, Chambers Stevens' world premiere comedy about the first meeting of Mark Twain and George Bernard Shaw, is next up, running Dec. 2-18.  New Theatre literary manager Steven Chambers directs (no, he and the playwright are not one and the same person).

Martinez then helms the world premiere of Robert Caisley's Winter (Jan. 27-Feb. 12), about a feud that erupts between fraternal twins and their late mother's mysterious assistant.  Then comes the world premiere of a New Theatre-commissioned play by Juan C. Sanchez, who also happens to run the company's box office and is also resident playwright at Davie's The Promethean Theatre.  Property Line, which will run March 23-April 8, is about a war between longtime friends and neighbors over 50 feet of grass on waterfront property.  The season's still-to-be-announced final offering will be a classic running May 18-June 12, 2012.