A dramatic shocker from Florida Stage 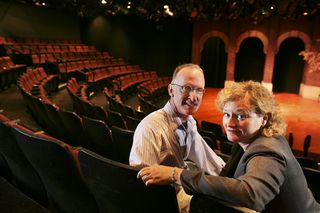 If you had told me last week that I would begin this one by writing about the end of Florida Stage, I would have thought you'd been overindulging in the real version of what the Hair cast pretends to smoke in Act Two.

But no, this particular nightmare is real.  It is, of course, most painful for artistic director LouisTyrrell, managing director Nancy Barnett and the nearly 30 others on the company's staff.  Twenty-four years after Tyrrell got Florida Stage going, all those theater pros are suddenly out of work in a time when joblessness is way too common  -- though few would argue that a career in theater guarantees security and stability.

But the abrupt closing of one of South Florida's finest companies, a theater with a well-deserved national reputation for developing new plays, is a loss for so many others too.

Theater lovers, those people for whom plays and musicals are created, have lost one of the region's most adventurous companies.  Subscribers who had no reason not to sign up for a 2011-2012 season that will never be have now lost their good-faith money, and that certainly does nothing to foster trust among folks thinking about buying a season's worth of tickets to another theater.

Plenty of out-of-town actors, directors and designers worked at Florida Stage (and by "out-of-town," I mean people who don't live in South Florida), but so did numerous artists who choose to make their careers here.  Working at Florida Stage was a sought-after gig and, more often than not, a professionally fulfilling one.  Creating a role in a brand-new play is a thrill.  So is working at a company with high artistic standards.  With Florida Stage gone, there's one less "home" for South Florida artists, one less place to help them cobble together a living doing what they love.

And yes, for those of us who spend our nights watching plays then analyzing them for readers, losing a company that has made so many of those nights interesting or wonderful or thought-provoking just plain hurts.  Oh, there were plenty of times that I drove north to Manalapan or, in the past year, West Palm Beach for a Florida Stage show and drove home with the word "why" tumbling around in my brain.  Why that show? Why that staging? Why a particular actor?  But actually, even when I was less than crazy about a Florida Stage play, I could nearly always figure out why Tyrrell chose the script.  Something about the writer's voice.  Or the ideas in the script.  Or the creative passion it stirred in him.

Having followed Florida Stage's story for nearly all of its 24 seasons, I hate the way that such an artistically impressive, risk-taking, important company is now in the process of vanishing, its last act bankruptcy.  I understand that some of the folks who tried to write a different ending believed that going public with the company's financial problems -- the $1.5 million in debt that finally sank Florida Stage -- would hurt attempts to find donors and sell tickets. That "logic" seems counterproductive.  If an award-winning, widely respected theater company is in trouble, ask for help.

Perhaps, in these hard times, nothing would have come from a "save our theater" campaign.  But perhaps Florida Stage could have been saved and bankruptcy avoided. Anyone who treasures the artistic, intellectual and emotional riches that great theater brings is poorer for the loss of one of the region's finest companies.

(Photo of Lou Tyrrell and Nan Barnett by Bob Eighmie)