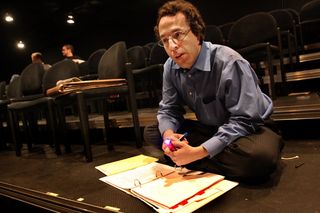 Artistic director Richard Jay Simon has just announced the full 2011-2012 season planned for Plantation's Mosaic Theatre, and it looks both enticing and exciting.

Kicking off the lineup Sept. 15-Oct 9 is Michael Weller's Side Effects, the playwright's newest portrait of a disintegrating marriage (in the mode of Weller's Fifty Words, a smash at GableStage last season).  Then comes the already-announced Lombardi, Eric Simonson's play a bout football legend Vince Lombardi, running Nov. 10-Dec. 4.

Conor McPherson, whose play The Seafarer was a Carbonell Award-winning hit for Mosaic, returns with The Birds, a spooky play based on the Daphne Du Maurier short story that inspired Alfred Hitchcock's thriller.  That one runs March 8-April 1.

Then comes a Mosaic first, the April 19-May 13 world premiere of The Michael Brewer Project (Working Title).  With help from a Funding Arts Broward/Knight New Work Award grant, the theater has commissioned award-winning, New York-based playwright and director Joe Calarco to write a piece about the 2009 attack on South Florida teen Michael Brewer, who was doused with alcohol and set on fire by other teens.  As with Lee Blessing's 1993 Patient A(about Fort Pierce resident Kimberly Bergalis, who developed AIDS and died after being treated by her dentist), the play will take on a much-publicized Florida story with national relevance.

The new Mosaic season ends June 7-July 1, 2012, with the already-announced Adam Rapp play The Edge of Our Bodies, a Humana Festival hit about a 16-year-old traveling from her New England school to New York to break some big news to her boyfriend.  Ten Chimneys, announced earlier as a choice for the new season, has been postponed.