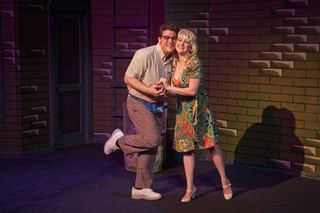 In theater as in life, stuff happens. Matthew William Chizever, one of the best horror-musical-comedy leading men in South Florida (hey, it's a genre), has been battling strep/tonsilitis leading up to tomorrow's planned opening of Song of the Living Dead, A Zombie Musical, a Promethean Theatre production in the Black Box Theatre at Nova Southeastern University.  And no matter how funny/weird the show (Cannibal! The Musical, anyone?), the lead actor has to be able to sing.

So unfortunately, producing artistic director Deborah L. Sherman had to scrub this week's shows and push Song of the Living Dead to next week.  The musical will preview Aug. 18 and open at 8 p.m. Aug. 19 in the black box at the Don Taft University Center, 3301 College Ave., Davie.  The show runs through Sept. 4, with performances at 8 p.m. Thursday-Saturday, 5 p.m. Sunday.  Tickets are $25.  For info, call 786-317-7580 or visit the Promethean web site. Anyone holding tickets to this week's shows can call the Promethean number or Ovation Tix at 1-866-811-4111 to make new arrangements.