« Ground Up starts up again | Main | A conference, a deal, a reading and a college show » 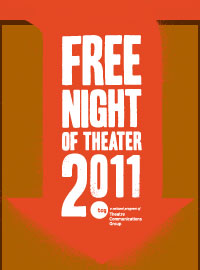 Theatre Communications Group's annual Free Night of Theater is actually a collection of nights throughout October.  As in the past, some South Florida theaters are taking part, hoping to expand their audiences by offering a free sample of their work.  This year, seven companies here are participating. Some are offering tickets to just one or two performances, but Boca Raton's Caldwell Theatre Company is providing some free tickets at each performance of Amy Herzog's After the Revolution Oct. 16-30.

The wrinkle this year is that those seeking freebies enter online, indicating their first, second and third choices, then find out if they've won tickets.  To enter, visit the Free Night of Theater web site, fill out the profile form, and you're entered to win tickets.  Besides the Caldwell, other options in this region are Hairspray at Actors' Playhouse in Coral Gables, Edith Can Shoot Things and Hit Them at New Theatre in Coral Gables, Women Drivers at the Women's Theatre Project in Fort Lauderdale, The Rocky Horror Show at Slow Burn Theatre in Boca Raton, Little Shop of Horrors at Lake Worth Playhouse and The Sunshine Boys at Delray Beach Playhouse.

Two things to remember: You have to sign up by Sept. 23 or you're out of luck.  And since the idea is to introduce theatergoers to companies that are new to them, don't sign up for tickets to theaters you've visited in the past year.

Got a one-act play that you're bursting to write? Enter it in the South Florida Writers Association's one-act play contest and you might win $200.  The entry fee is $10 (a check or money order made out to the group), and plays that have been produced or won other contests aren't eligible.  The first-place winner gets to cast and direct a public reading of his or her work; second place winner takes home $150, third place $100.

PEOPLE NEWS:  Terence Blanchard, artistic director of the Henry Mancini Institute at the University of Miami's Frost School of Music, has been chosen to compose music for the spring Broadway revival of Tennessee Williams' A Streetcar Named Desire.  Blair Underwood will make his Broadway debut as Stanley Kowalski, and McCarter Theatre's Emily Mann will direct.

Former Hair star Matt DeAngelis, whose next gig will be touring in American Idiot, will teach a master class this Friday from 7 to 9:30 p.m. at Arts Alive, 10450 W. Atlantic Blvd., Coral Springs.  The $60 fee includes the class and free admission to the new music school's cabaret afterwards. Master class participants have to bring their own sheet music. Call 954-372-7878 or visit the Arts Alive web site for info.

Arts supporters Donald and Ann Brown have stepped up big time to back one of their favorite companies, Palm Beach Dramaworks.  The couple has donated $2 million and will have the company's new theater space on Clematis Street in downtown West Palm Beach named after them.  The revamped facility, formerly the Cuillo Centre for the Arts, will have a gala dedication on Nov. 11, and the first production in the 218-seat theater -- Arthur Miller's All My Sons -- opens the following night.

Artistic leadership at Fort Lauderdale's Rising Action Theatre is changing.  David Goldyn, who founded the theater five years ago and served as its producing artistic director, is going to New York to pursue opportunities there (though he'll remain a consultant to the company).  Andy Rogow, former artistic director at the Hollywood Playhouse and past president of the Theatre League of South Florida, takes over as producing director.