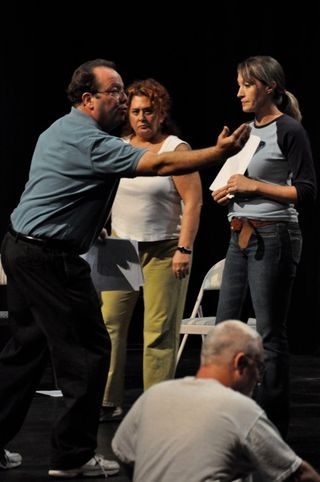 So I went to the Naked Stage's fifth annual 24-Hour Theatre Project on Monday evening, and work has been kicking my behind ever since.  But I didn't want to let the work week end without sharing a few random observations, memories and special moments from what has become a welcome, creative bonding ritual for South Florida's theater community.

*  It never ceases to amaze me what so many talented professionals are able to pull off in such an incredibly short time.  How do you write a short play, let alone a good short play, in 12 hours?  How does an actor not only memorize and retain sometimes-complex dialogue, but do a convincing/funny/compelling job of creating a character in 10 hours or less?  How does a director get the new play staged, how does the sound designer find just the right music and effects, how does the behind-the-scenes team bring each little world to life? From the audience, even with the odd glitch, it looks like magic. 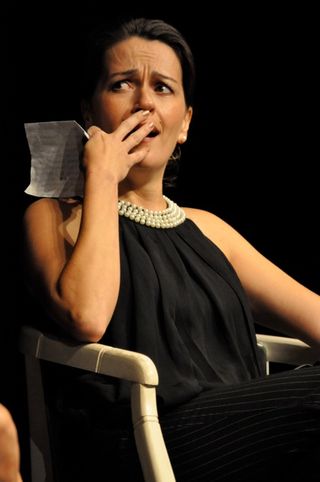 *  As always, the plays were a mixed bag, generally enjoyable and, this year, heavy on sexual themes and content.  Which is fine, except there were a few kids in the audience, which can make an otherwise perfectly acceptable adult play cringe-inducing.

*  My personal favorites among the plays were written by three of the four founders of Miami's Zoetic Stage.  Stuart Meltzer (who then did double duty as director of Christopher De Paola's Marvin Becomes a Man) spun the title Hubris and the Rain Cloud into the story of three witty, withering sisters confronting the hot young waitress who's been sleeping with one sister's husband.  Christopher Demos-Brown crafted a little gem titled A Martin Among Us, a riotous piece about a nerdy guy who can simply point his finger and give the gift of sexual ecstasy to just about anyone.  And Michael McKeever, the prolific playwright who became a plot point in Tony Finstrom's Imaginary Friends, wrote the riotous yet touching Love Machine, Rusted, about a sexually frustrated young couple and the swingers who come calling. 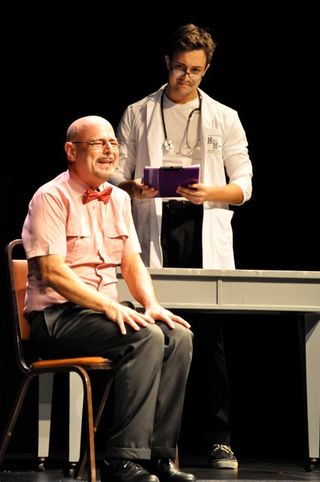 *  Performances in 24-Hour's fleeting plays that were especially memorable include Amy McKenna as a world-weary rabbit and Laura Hodos as a cute-as-a-button bunny in Andie Arthur's Ifigenia and the Inadequate Wand; a biting Melissa Minyard and Irene Adjan in Hubris and the Rain Cloud; Oscar Cheda as the Martian and Anne Chamberlain, Andrew Wind and Michaela Cronan as the recipients of his special gift, in A Martian Among Us; Adam Simpson and Betsy Graver as the young couple, Karen Stephens and John Felix as the bizzaro swingers in Love Machine, Rusted.

Five years after Naked Stage founders Katherine Amadeo, Antonio Amadeo and John Manzelli first tried The 24-Hour Theatre Project, the event has become a joyous, exhausting kickoff to each new season.  It showcases much of South Florida's theater talent and makes you eager to see what these gifted actors, directors and playwrights will do in longer form -- with much more rehearsal -- during the season. Please, bring it on.

(Bachi Frost photos, from top, show Avi Hoffman rehearsing with Sally Bondi and Amy Miller Brennan for Holy Mary, Mother of Todd; Melissa Minyard in Hubris and the Rain Cloud; Oscar Cheda and Andrew Wind in A Martian Among Us.)