Tommy Tune, Broadway superstar, has been working away quietly at the University of Miami, applying the talent and vision that helped win him nine Tony Awards to a new show about the heyday of Studio 54 . 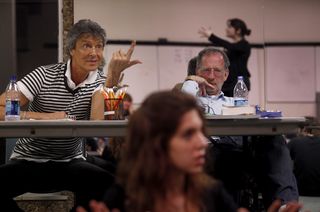 Working with playwright Mark Saltzman, the soft-spoken Tune has channeled personal memories and impressions of his one-time hangout into Fifty*Four*Forever, a disco-driven snapshot of the late-'70s club that was, for a time, the hottest see-and-be-seen place on the planet.

Tune, Saltzman and their collaborators workshopped the piece last January at UM's Department of Theatre Arts, where chairman Henry Fonte has busily forged alliances between the worlds of professional and educational theater since assuming his post last year.  Now, Fifty*Four*Forever has reached its second phase, as a fully produced musical at the Jerry Herman Ring Theatre.  Running for only 10 days,the piece is both a buzz-generating university event and (because Tune has invited theater pals to come south to see it) a flashy version of a backers' audition for a potential New York production. 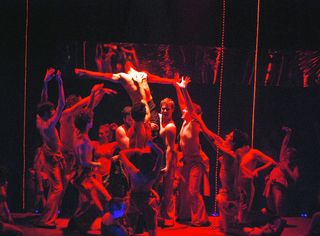 The UM show features an all-student cast, young actors who roamed the Ring before Wednesday's opening performance, chatting happily with audience members and saying just how much they have loved working with Tune.   In addition to what they've learned from their famous director and playwright Saltzman, they've watched as the production's other seasoned theater pros, including set designer Roger Hanna, costume designer Dona Granata, choreographer David Warren Gibson, musical director Greg Brown and lighting designer Eric Haugen, resurrected a place, a style and an era.

Undoubtedly, if Fifty*Four*Forever has a future life, it will continue to evolve.  The UM version runs just 70 minutes.  And as good as many of the students are, experienced professional actors would bring their own magic to the musical.  (Note that we don't review student performers unless, as in the recent Arsht Center-UM collaboration on The House of Bernarda Alba, they're being paid for their work.) 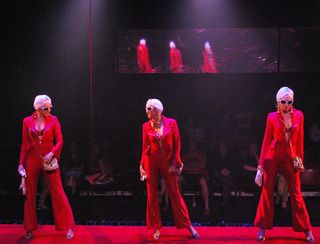 The opening-night audience didn't just like the musical: They adored it. Lots of the Ring patrons, including smiling seniors (that's senior citizens, not college seniors), looked a little let down when the show ended.  The sexy musical's disco-song mix (including Hustle, Funkytown, Love to Love You Baby, YMCA) got them moving and grooving, and they didn't want to stop.

So what about a future for Fifty*Four*Forever?  Again, because this isn't a professional out-of-town tryout, we'll pass on a review.  But as the creative team goes forward, a few thoughts:  Saltzman has chosen to write Rubell's rise-and-fall story in verse, which presented a challenge for the young actors and led occasionally to awkward/clunky rhymes. Sticking with straightforward dialogue would work just fine.

The show's one original song, Lament for Three Jersey Girls (by composer Jeffrey Saver and lyricist Stephen Cole), is terrific, theatrical and funny. More like that, please.

Tune's inspired touch is all over the show.  I'm thinking particularly of the duet between the undercover FBI agent and his sexy blond boss, the two taking athletically seductive twirls around a pole as they sing.  Muy, muy caliente.