New Theatre has its new home 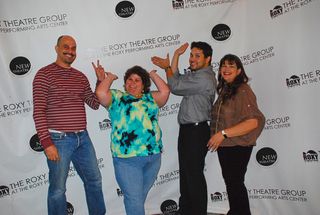 When the building that housed New Theatre on Laguna Street in Coral Gables was sold, the troupe was left scrambling. Having to vacate its home for the past 10 years by Dec. 15, the company couldn't open its world premiere production of Chambers Stevens' Twain and Shaw Do Lunch (set for Dec. 2-18) in the space where Nilo Cruz's Pulitzer Prize-winning Anna in the Tropics premiered in 2002.  So New Theatre has been on the hunt for a place where the rest of its season can play out.

Monday, the company announced an agreement with the Roxy Performing Arts Center, which is located across from Florida International University's main campus in Miami.

"The theater community has been incredibly generous in offering us different kinds of support," says Ricky J. Martinez, New Theatre's artistic director.  "But the day we went to Roxy, they said, 'We want you here, now.'  We felt the choice to go to Roxy was synchronized with our vision, and our shows fit into their schedule."

The Roxy Performing Arts Center, entering its 10th season in 2012, offers arts classes for children ages 3 to 17, and it stages large-scale, large-cast musicals featuring performers from 10 to 22.  Spokesperson Susanne Pinedo says, "I'm just beyond excited.  Both organizations highly value education, and we feel it will be an extraordinary partnership."

Martinez says the rest of New Theatre's 2011-2012 season will be presented at Roxy, with all subscriptions honored.  After Twain and Shaw Do Lunch, the company will present the world premieres of Robert Caisley's Winter and Juan C. Sanchez's Property Line, plus one more show to be announced. Though some dates may shift slightly due to the relocation, all shows announced for the season will be presented.

Roxy has two theater spaces, one with 125 seats, the other with nearly 200; both are larger than New Theatre's 100-seat Coral Gables theater.  Martinez says that at the end of the season, both organizations will assess how well the temporary partnership has worked, and he is excited about the possibilities.  More affordable rent will allow New Theatre enhanced production values, including the creation of two-story sets.

"We both have mutual long-term goals," he says.  "This is New Theatre's fourth move, and we're excited to look ahead to this new phase of its life.  We're hoping to host the National New Play Network's conference next year -- hopefully in our new space."