Manuel Carbonell, last of the Cuban master sculptors and the man for whom South Florida theater's Carbonell Awards are named, died Thursday in Miami.  He had celebrated his 93rd birthday Oct. 25, was still working in his studio at the age of 92.

Of Spanish descent, Carbonell was born in Sancti Spiritus, Cuba, where he began drawing and sculpting clay figures as a boy.  He studied at the Escuela Nacional de Bellas Artes in Havana, as did fellow sculptors Wifredo Lam and Agustin Cardenas.  From 1945 to 1959, he began receiving critical acclaim for his life-sized sculptures and carvings, as well as hosting a weekly television show on art and creating furniture for the interior design firm he had launched. 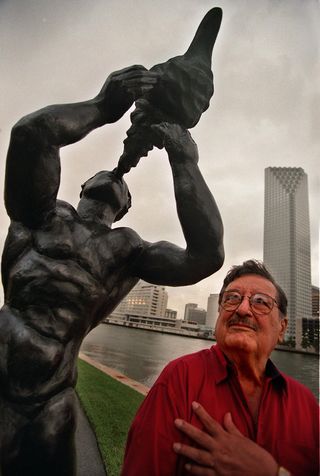 Leaving Cuba for New York in 1959, Carbonell moved from classical and religious sculpture to his modernist style, working in hammered metal and bronze as he created large-scale, sensuous work that was more abstract.  He relocated to Miami in 1964, reuniting with the extended Cuban family (including sisters Angela and Josefina) that was by his side throughout his life.  His nephew Ricardo Gonzalez III eventually became director of Carbonell's Miami-based Beaux Arts Gallery, launched in 1988.

In 1992, Carbonell won a competition to create a sculpture at Miami's Brickell Avenue bridge.  The bronze monument, titled "The Pillar of History," features a 36-foot-tall bas-relief column with 158 figures depicting the story of the Tequesta Indians, Miami's first inhabitants.  Atop the pillar is a 17-foot-high sculpture of a Tequesta warrior, his wife and child.  In niches at the supporting piers are 4-by-8-foot bas reliefs honoring Miami pioneers Julia Tuttle, Henry Flagler, Marjorie Stoneman Douglas, and William and Mary Brickell.

Carbonell's large-scale sculptures are found all over the world -- in a Shanghai park, at the Gerald R. Ford presidential museum in Michigan, at the San Carlos Institute in Key West and in numerous Florida cities.

A Brickell Key condominium building was named for him, but his more artistically important namesake is the 36-year-old Carbonell Awards.  In 1976, the artist created the egg-shaped bronze sculpture on a marble base given annually to South Florida's actors, directors, designers, musical directors and choreographers to recognize the best work in the region's far-flung theater community.  In recognition of what would become a three-decades-plus contribution as the program's grand benefactor, the awards were rechristened in Carbonell's honor.

A mass and celebration of the sculptor's life will be held at 6 p.m. Friday in the chapel of Belen Preparatory School, 500 SW 127th Ave., Miami.