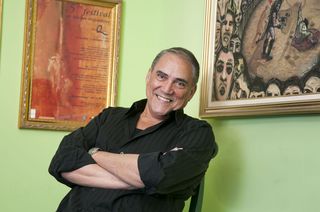 After paying tribute in past festivals to the theater of Mexico, Colombia and other countries, this year's festival will focus on Latino theater in the United States.  And its offerings -- some in English, others in Spanish, still others bilingual -- are casting a wide net in terms of audience inclusion.

The festival gets an early launch June 8 with an invitation-only cocktail reception to reveal artist Roberto Silva's poster.  A jazz concert from the Jaume Vilaseca Trio of Barcelona will keep the party going from 7 to 10 p.m. in Miami Dade College's Wolfson Campus Auditorium.

This year the festival will give its lifetime achievement in the performing arts award to Teresa María Rojas, founder of Prometeo Theatre and a prominent theater educator who was the first mentor to Pulitzer Prize-winning playwright Nilo Cruz. She'll receive the honor immediately after the opening night performance July 12.

That show is a production of Miguel Piñero's incendiary Short Eyesby the Los Angeles-based Urban Theatre Movement.  It kicks off the festival at 8:30 p.m. July 12-13 in the Carnival Studio Theater at Miami's Adrienne Arsht Center for the Performing Arts. For mature audiences, the play features brief nudity and is performed in English.

At 8:30 p.m. July 13-14, Prometeo Theatre will perform Marco Antonio de la Parra's Infieles (Unfaithful), a play about being unfaithful personally and politically.  That show will be presented in the Wolfson Auditorium.

The Los Angeles-based Latino Theater Company will perform Evelina Fernández's play Solitude, a work inspired by Octavio Paz's The Labyrinth of Solitude.  The play will be done at the Carnival Studio Theater in English at 8:30 p.m. July 14, 5 p.m. July 15.

Flor de un Día, a company from Buenos Aires, will present Santiago Loza's Nada del amor me produce envidia (Nothing About Love Produces Envy), a musical theater piece about a seamstress who gets orders for identical dresses -- one coming from Eva Perón.  That show goes on in Spanish at 8:30 p.m. July 18-19 in the Prometeo Theatre at Miami Dade's Wolfson Campus.

A production of Oscar Martinez's Ella en mi cabeza (She's On My Mind) by Arte & Friends from Bogota, Colombia, will be done in Spanish at the Carnival Studio Theater at 8:30 p.m. July 21, 5  p.m. July 22.

The festival winds up with performances from two companies.  Ecuador's Contra el Viento Teatro performs Patricio Vallejo Aristizábal's  La flor de la Chukirawa (The Flower of Chukirawa)at 8:30 p.m. July 27-28 in Spanish at Prometeo Theatre.  And artistic director Sánchez's company,
Teatro Avante, closes out the festival at 8:30 p.m. July 26-28, 5 p.m. July 29, with Virgilio Piñero's play El no (The No), adapted by Gilda Santana and presented in at the Carnival Studio Theater in Spanish with English supertitles.

Special events during the festival include a Spanish-language educational conference on trends in Latino and Latin American performing arts from 9 a.m. to 5:30 p.m. July 13-14 at Miami Dade's Wolfson Campus, Room 2106.  Prometeo will also do a free staged reading at 8:30 p.m. July 16 of three short plays by Julio Matas (The Change,Tonos and The Ladies' Game) at its Wolfson Campus theater.  The company will do another free reading at 8:30 p.m. July 17 of Luis Enrique Gutiérrez Ortiz Monasterio's The Girls from the 3.5 Floppies, a play for mature audiences.  Both evenings are in Spanish.

Tickets to individual festival shows are $30 each, but they're discounted to $25 each for three or more shows, seniors, students or those with disabilities.  For tickets to events at the Arsht Center's Carnival Studio Theater, 1300 Biscayne Blvd., Miami, call 305-949-6722 or visit the center's web site.  For tickets to events at Prometeo, 300 NE Second Ave., Miami, call 305-237-3262 or visit Prometo's site.  Miami Dade's InterAmerican Campus is at 627 SW 27th Ave., Miami; the Key Biscayne Community Center at 10 Village Green Way, Key Biscayne. Both of those venues have free parking.