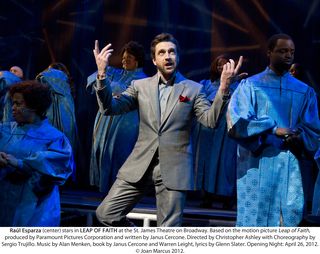 Even a Tony Award nomination as best musical didn't provide salvation for Leap of Faith.  The Broadway version of a 1992 Steve Martin movie will close Sunday, after 24 previews and 20 regular performances.  That's sad news for everyone involved in the show, including leading man Raúl Esparza, the over-the-title star who has been with the musical since its first workshop in 2008.

I saw Leap of Faith during its early preview period in April so that I could do a feature on Esparza, the ex-Miamian who has earned Tony Award nominations as best actor (Company) and best featured actor (Taboo) in a musical, best actor (Speed-the-Plow) and best featured actor (The Homecoming) in a play.  I had two conversations with him and got to watch some of a rehearsal at the St. James Theatre, where director Christopher Ashley, choreographer Sergio Trujillo and the rest of the creative team were reshaping the show with all sorts of changes.  To no avail.

When the show opened April 26, it got some tough reviews.  Particularly damaging to its future was the scorched-earth one from the New York Times' Ben Brantley, who called Leap of Faith "...this season's black hole of musical comedy, sucking the energy out of anyone who gets near it." Good God, y'all.

The cast and Esparza, who gave a high-energy, intricately shaded performance as faux faith healer Jonas Nightingale, didn't have a prayer.  The $15 million musical, one that had three different directors (Taylor Hackford, Rob Ashford and Ashley) during its evolution, one that won Esparza a best actor Ovation Award for his performance in the show's Los Angeles tryout, will fold its (revival) tent on Sunday.  It dies just a week after grossing a paltry $171,381 from April 30 to May 6, its average ticket price a deeply discounted $21.51.

Without a doubt, the show by composer Alan Menken, lyricist Glenn Slater, and book writers Janus Cercone and Warren Leight could have benefitted from additional months of work, had the producers followed their original plan and brought it to Broadway this fall instead of jumping into the St. James this spring after the failed revival of On a Clear Day You Can See Forever closed.  Would a delay have made a difference?  Maybe not.  But after Sunday, a lot of talented actors -- including a gifted and so often impressive leading man -- will be doing what actors so often find themselves doing: looking for work.