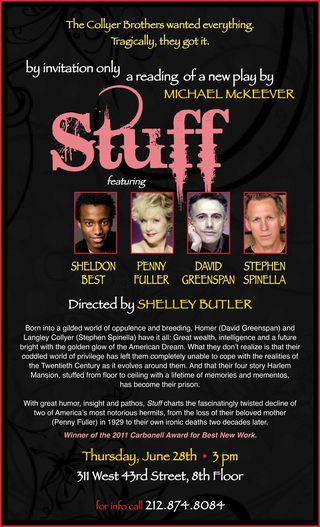 Happy times for South Florida's prolific and widely produced Michael McKeever.  His play Stuff, which won the 2011 Carbonell Award as best new work after its world premiere at Boca Raton's Caldwell Theatre Company, will get an invitation-only staged reading at 3 p.m. Thursday in New York.

The play about the real-life, way-eccentric Collyer brothers -- born into great wealth, they descended into a world of hoarding and madness -- features an impressive cast for the reading, which is being directed by Shelley Butler.

This reading of a play that got strong reviews for its South Florida debut could be a step toward a New York production for McKeever, whose work is produced at theaters throughout the United States and in Europe.