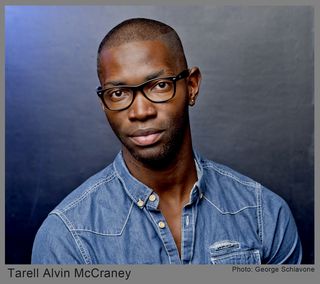 Miami's Tarell Alvin McCraney, whose sizzling 90-minute Royal Shakespeare Company adaptation of Hamlet (written with Bijan Shebani) will play GableStage Jan. 12-Feb. 10, is busy adding to his reputation (at home and abroad) as one of America's most talented young playwrights.

Commissioned by New York's Manhattan Theatre Club, where it will get its U.S. premiere with previews starting June 18 and an opening July 2, Choir Boy is set in a black boys' prep school celebrating its 50th anniversary.  The headmaster's nephew is at odds with Pharus, a gay student with a glorious tenor voice who is determined to become leader of the school's famous gospel choir.  In her review in The Guardian, critic Lyn Gardner writes: "Threaded with searing gospel songs, McCraney's play examines the shifting nature of truths, biblical and otherwise, and cleverly manipulates the hot-house setting to consider wider issues of black American history, from the brutal days of slavery to Obama's cry of 'yes we can!'"

The playwright, building on the reputation he established with The Brother/Sister Plays, has another important premiere this season.  Tina Landau will direct his play Head of Passes for Chicago's Steppenwolf Theatre, where he is an ensemble member. Running April 4-June 9, the play is a reimagining of the Book of Job set during a woman's surprise birthday party.

Here's hoping these new works will make their way to South Florida.