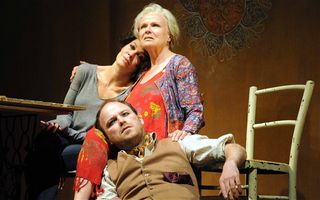 New Theatre is winding up its run of Willy Russell's Educating Rita at Miami's Roxy Performing Arts Center this weekend, with performances at 8 p.m. Friday-Saturday, 1 and 5:30 p.m. Sunday.  But venture into Coral Gables, and you can catch the great Julie Walters (the actress who originated the role of the knowledge-hungry Rita) on screen in the National Theatre of London's production of The Last of the Haussmans.

In Stephen Beresford's play, Walters plays Judy Haussman, a matriarch whose spirit is more '60s than high society; Helen McCrory and Roy Kinnear costar as her daughter and son.  The comedy, part of the "Live from the National Theatre of London" series, will be shown through the weekend at 1 p.m. Friday-Sunday at the Coral Gables Art Cinema, 260 Aragon Ave., Coral Gables.  Tickets are $16 ($14 for seniors 65 and older and for fulltime students, $12 for Cinema members, $10 for children 12 and under).  For info, call 786-385-9689 or visit the movie theater's web site.