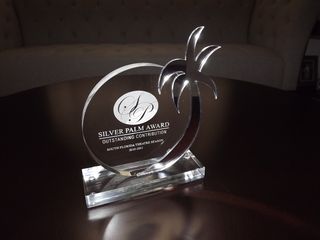 The Silver Palm Awards are to South Florida's Carbonell Awards as Off-Broadway's Obie Awards are to Broadway's Tonys.  The five-year-old Silver Palms have "...no nominees, no winners or losers, and no limit to the number of citations given in any 'category,' though there really are no official categories," says playwright Tony Finstrom, the awards' chairman and founder.

In other words, the awards for excellence in local theater from Sept. 1, 2011, to Aug. 31, 2012, are more free-form than the Carbonells.  Finstrom, TV host Iris Acker and critic Ron Levitt form the Silver Palm committee, and recommendations are made by a panel of critics and theater freelancers (including me).

This year's awards will be presented during the annual holiday party held by the South Florida Theatre League.  The celebration happens Dec. 3 from 7:30 to 11 p.m. at a to-be-announced Fort Lauderdale venue. Non-Theatre League members will pay an admission fee, but members party for free.  For info and reservations, call Andie Arthur at 954-577-0778; for Silver Palm details, visit the organization's web site.

Now to the winners, which for the first time include six previous Silver Palm recipients.  The year's honored directors are GableStage's Joseph Adler (for Race, Red, The Motherf**ker With the Hat and Time Stands Still), Actors' Playhouse's David Arisco (for Next to Normal and Jacob Marley's Christmas Carol), Margaret M. Ledford (for After the Revolution at the Caldwell Theatre Company, The Unseen at Promethean Theatre and Turn of the Screw at the Naked Stage) and Stuart Meltzer (for his consistently outstanding work as Zoetic Stage's resident director). 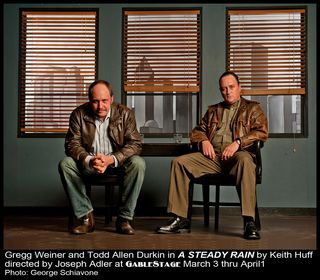 The honored playwrights are Mark Della Ventura (for writing and performing Small Membership, and for his performance in Lobby Hero, both at Alliance Theatre Lab), Christopher Demos-Brown (for Captiva at Zoetic), Kim Ehly (as outstanding new playwright for Baby GirL, a Kutumba Theatre Project production at Empire Stage) and Michael McKeever (for Moscow at Zoetic).

Actors being honored with Silver Palms are Katherine Amadeo (for Naked Stage's Turn of the Screw), Jim Ballard (for All My Sons and The Fantasticks at Palm Beach Dramaworks and Side Effects at Mosaic Theatre), Ken Clement (for Jacob Marley's Christmas Carol and Becky's New Car at Actors' Playhouse and The Last of the Red Hot Lovers at Stage Door Theatre), Todd Allen Durkin (for Captiva at Zoetic, A Steady Rain at GableStage and A Measure of Cruelty at Mosaic), Lindsey Forgey (as outstanding new talent for Baby GirL at Empire Stage and Into the Woods, Urinetown and Xanadu at Slow Burn Theatre), Jodie Langel for Next to Normal at Actors' Playhouse and Joseph and the Amazing Technicolor Dreamcoat at the Maltz Jupiter Theatre), Laura Turnbull (for The Effect of Gamma Rays on Man-in-the-Moon Marigolds at Dramaworks, Becky's New Car at Actors' Playhouse and Death and the Maiden at Mosaic) and Gregg Weiner (for Red, A Steady Rain, Race and Time Stands Still at GableStage). Also being honored are set designer Michael Amico (for his Palm Beach Dramaworks designs for All My Sons, The Effect of Gamma Rays on Man-in-the-Moon Marigolds and Master Harold...and the boys) and Fort Lauderdale's Island City Stage (as outstanding new theater company for its debut with The Twentieth Century Way at Empire Stage).

The Theatre League will also present its annual Remy Awards at the holiday celebration. Director Amy London, executive director of the Carbonell Awards, gets the Pioneer Award, and journalist Bill Hirschman gets the Service Award for his Florida Theater On Stage blog.