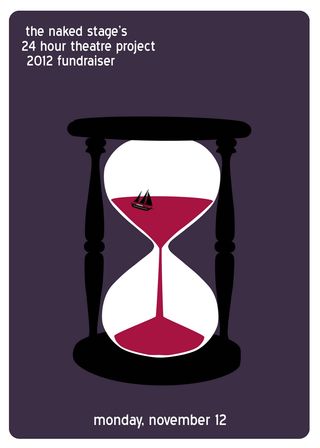 It's Sunday night -- do you know where your playwrights are? For eight South Florida writers, the answer is that they're somewhere in the regal elegance of the Biltmore Hotel in Coral Gables, sweating bullets.

By Monday at 8 p.m., those currently-in-process short plays will be in front of the audience at this year's 24-Hour Theatre Project, the Naked Stage's popular annual fundraiser and theater community bonding experience.  Right now, the plays are still swirling around in the playwrights' heads, making the transition into their laptops.  But thanks to the luck-of-the-draw ceremony that took place at GableStage earlier tonight, the playwrights now have their titles, directors and casts.

If you go to the one-and-only performance at GableStage Monday evening, here's what you'll see:

You can be a part of the first and only audience to see the world premieres of these eight new plays, which open and close Monday at GableStage in the Biltmore, 1200 Anastasia Ave., Coral Gables.  Tickets are $35 ($50 for a reserved VIP seat and a souvenir poster).  Call 1-866-811-4111 or visit the Naked Stage web site for tickets.