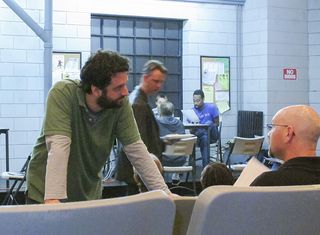 The one-night-only performance of the eight little plays created for Naked Stage's 24-Hour Theatre Project 2012 has come and gone.  Hopefully, the sleep-deprived playwrights are starting to feel human again today, thanks to much-needed zzzzs and the satisfaction of a job well done.  As for artistic director Katherine Amadeo and her multitasking hubby Antonio Amadeo (the author, director, designer and star of the current A Man Puts on a Play at Barry University's Pelican Theatre), after being up for 48 hours straight, they deserve a week at a spa. But the fact that they are parents to school-age daughter Lara and baby son Max makes that an unlikely fantasy. 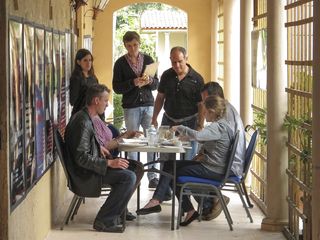 Naked Stage's annual fundraising event has become a much-anticipated opportunity for South Florida's theater community to show just how impressive its work can be under the tightest of time constraints.  After the playwrights did their thing over the hours when Sunday evening morphed into Monday morning, actors, directors, stage managers and interns arrived at the Biltmore Hotel at the raw hour of 7 a.m. Monday to learn their newly created lines, get the plays up on their feet, and rehearse, rehearse, rehearse before the single 8 p.m. public performance at GableStage, the place where 24-Hour Theatre began six years ago.  The free hosting of the event was, once again, thanks to GableStage artistic director Joseph Adler; as Antonio Amadeo noted from the stage, Adler supports the theater community again and again by turning over his space for readings, performances and events like 24-Hour Theatre. 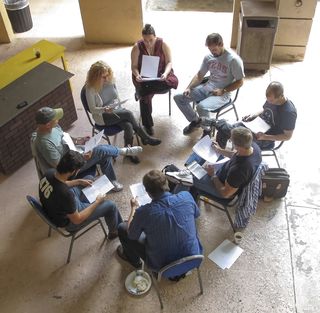 This year, the audience of theater folk and theater fans got a lot of bang for their ticket price bucks.  As always, there were hits, misses and messes, but overall, South Florida theater did itself proud.

For me, the loveliest and fullest play of the evening was Stuart Meltzer's Pieces of Lisa.  Staged by Amy London and driven by Nicholas Richberg's quietly magnetic performance as a grieving son, the play explored the different mourning styles of three disparate brothers and their stoic father.  Meltzer's writing was funny, clever and touching, and Pieces of Lisa is clearly a short play worthy of a future life.

Christopher Demos-Brown went for smart, funny dialogue mixed with a snippet of meta theater in The Peanut Butter Conspiracy, a comedy about four parents at a tony private school who have been called on the carpet for the sin of sending a kid to school with a banned peanut butter sandwich. Funniest moment: When Tracey Barrow-Schoenblatt as a sexy mom and Oscar Cheda as a gay dad looked at an exquisitely attired, ridiculously in shape Jim Ballard and voiced the same simultaneous thought: "He's hot."  With some tweaks, Peanut Butter could stick around too. 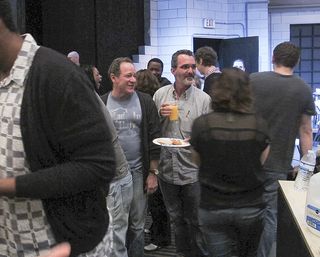 Also on the plus side: Juan C. Sanchez's Splintered, a play about a man (Clive Cholerton) certain that his departed wife (Barbara Sloan) isn't really gone; Michael McKeever's Goldfish Don't Bounce, a neat comedy about a newly-in-love young couple (Arielle Hoffman and Adam Simpson) and an unhappily married pair (Lela Elam and Wayne LeGette) "celebrating" their 14th anniversary; and Andie Arthur's Mermaids in the Attic, a haunting piece (featuring Troy Davidson, Julie Kleiner and Hunter McConnell) about the loss of two generations of women in a family.

A large cross-section of South Florida's far-flung theater artists gather and mix three times a year:  At the annual Carbonell Awards, which honor some of the best work done during the previous year; at the Theatre League's annual holiday party, where the Silver Palm Awards are bestowed; and at the 24-Hour Theatre Project.  Naked Stage's event isn't about competition.  It's about creativity and community-building.  And on that score, 24-Hour Theatre delivered as it always does -- impressively.