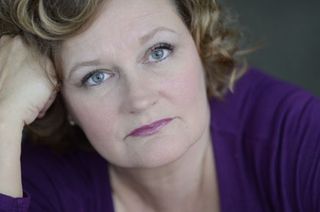 Barnett has spent this season as executive director of Actors Express in Atlanta, an NNPN member company celebrating its 25th anniversary season.  But she built her career as an actor and administrator alongside Florida Stage artistic director Louis Tyrrell until the acclaimed company, which was based in Manalapan for most of its 24 years, ceased operations in 2011 due to the bruising recession and a loss of support after a move to West Palm Beach.

Florida Stage was a NNPN member theater, and Barnett led the organization's board while she was managing director of the company.  Miami's New Theatre, Sarasota's Florida Studio Theatre and the Orlando Shakespeare Theater are also members, and Miami's Zoetic Stage is an associate member.

"You don't get two dream jobs in a lifetime, but I think I might have," Barnett said Monday from her Atlanta office.  "NNPN has taken ideas that were floating around the field and tried them, moved them forward...Several of our programs are being replicated in other organizations, which is flattering."

Barnett said that among the NNPN initiatives with great potential are the New Play Exchange, a database of new works that should help plays come to the attention of more theaters, and NNPN associate memberships.

Founded in 1998, the NNPN began an innovative "rolling world premiere" program, in which several members theaters agree to produce a new play in the same season, giving the playwright more national exposure and the chance to continue developing a script as he or she sees what different actors and directors bring to the work.

Barnett, who earned her bachelor of fine arts degree from the North Carolina School of the Arts Professional Training Program, will start her new job in May. She and her actor-husband Gordon McConnell plan to keep their home in Florida, but she notes that the timing is right for a move:  Their son Hunter goes off to college in the fall.

She succeeds Jason Loewith, who is leaving NNPN to become artistic director of Maryland's Olney Theatre Center.  NNPN is based at Washington D.C.'s Woolly Mammoth Theatre.  For more information on NNPN, visit the organization's web site.