Slow Burn heats up in Aventura 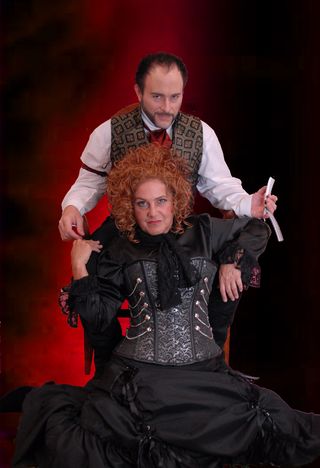 Patrick Fitzwater and Matthew Korinko, the founders and co-artistic directors of Slow Burn Theatre, have taken a slow and steady approach to growing their company since launching it in early 2010 with the musical Bat Boy.  Slow Burn performs at the West Boca Performing Arts Theatre, a huge venue that happens to be the theater at West Boca Raton Community High School.  Yet unlike their savvy business plan, the quality of the theater art that the duo produces has grown at warp speed.

In rehearsal for their April 12-21 of Stephen Sondheim's Sweeney Todd(their third Sondheim, after 2010's Assassinsand 2012's Into the Woods), Fitzwater and Korinko are unveiling their first expansion plans.  Next season, two of their productions will open in West Boca, then play the Aventura Arts & Cultural Center.

"Jeff Kiltie [event services manager] from the Aventura center came to see our production of Xanadu, then came back this fall to see Avenue Q," Fitzwater said Wednesday.  "He said he thought the quality was fabulous...so we've been in talks for a couple of months about how moving shows would help us and how it would help them."

Next season, Slow Burn will produce four musicals:  Tom Kitt and Brian Yorkey's Pulitzer Prize-winning Next to Normal, which premiered regionally at Coral Gables' Actors' Playhouse in 2012;  Jason Robert Brown and Alfred Uhry's Parade; Chess, the musical by ABBA guys Bennie Andersson and Björn Ulvaeus, with lyrics by Tim Rice; and High Fidelity, a musical by Kitt, Amanda Green and David Lindsay-Abaire, based more on the Nick Hornby novel than the hit movie.  Next to Normalwill kick off the Aventura partnership Nov. 7-10, with Chess traveling to Aventura April 10-13.

Fitzwater directs and choreographs Slow Burn shows, which have often starred Korinko.  The latter on Monday shared the best ensemble Carbonell Award for his work in Neil Simon's Rumors at Stage Door Theatre in Coral Springs.  The risk-taking Slow Burn hasn't been eligible for South Florida theater's highest honor so far.  That's not because of the quality of the company's work (the region's critics have been and continue to be impressed) but because the founding duo's fiscally conservative strategy means their shows don't run long enough to be given consideration. With the additional Aventura performances, that may change, at least for Next to Normal and Chess.

Fitzwater said he chose the two shows for the 326-seat Aventura venue because (no surprise) they made sense financially or commercially.

"Next to Normal has a small cast and a unit set," he said.  "And with Chess, we can fall back on the ABBA connection."