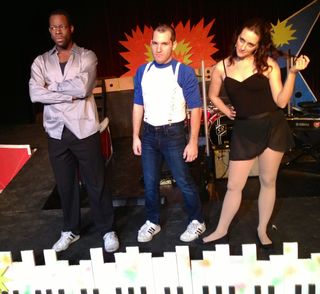 Boca Raton's Outré Theatre Company, which launched in November with Andrew Lippa's musical The Wild Party, is turning to an autobiographical musical by Rent creator Jonathan Larson for its next production.  tick, tick...BOOM! began as a solo show performed by Larson in 1990.  After his tragic death on the night before the first preview of Rent -- the musical that would make his reputation and win him a posthumous Pulitzer Prize -- playwright David Auburn restructured tick, tick...BOOM! as a piece for three actors.  Miami's Raúl Esparza won an Obie Award for his performance as Jon in the 2001 Off-Broadway production.

In the Outré production, Michael Westrich plays Jon, an aspiring composer whose fast-approaching 30th birthday has him questioning whether to follow or drop his dreams.  Sabrina Gore is Susan, Jon's dancer-girlfriend, and Jerel Brown is his pal Michael, a former actor who has given up showbiz for a more lucrative corporate life.