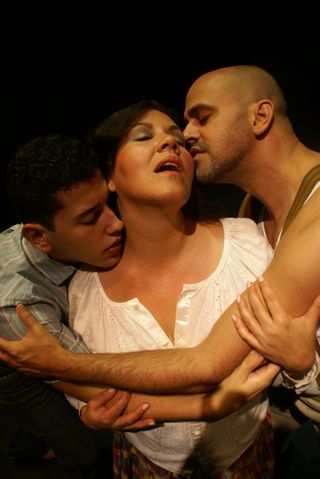 Ricky J. Martinez, the artistic director at New Theatre, has been working on a trilogy of plays for a long time -- over 10 years, actually, starting before his graduation from Miami's New World School of the Arts.

The first play, Sin Full Heaven, debuted at New Theatre in 2007.  Now another one, Road Through Heaven, is getting its world premiere at New Theatre this weekend (the third, Heavenly Hand, is still to be produced).

Like the others, Road Through Heaven is part of what Martinez calls In God's Land: An Island Trilogy.  It is set on "a forgotten island" in the Caribbean, focusing on three people whose lives become entwined:  Jesus (Javier Cabrera), a 21-year-old who was orphaned at the age of 12;  Dolores (Evelyn Perez), a tough woman in her late 30s; and Victor (Martinez), a hard worker devoted to his woman and, increasingly, to the younger man.

"I wrote the plays because, as a first generation Cuban-American, I was trying to figure out who I was," says Martinez.  "I was influenced in this one by images of mules, men, the sky, the occult, unconditional love, balance and the suspension of time."

Martinez hadn't intended to play Victor, but when the production was moved to May and the actor who was originally cast became unavailable, director Margaret M. Ledford convinced the playwright to take on the role.

"I told him, 'I think you're perfect,'" she says.  "This is a very haunting script.  The magical realism takes everyday relationships and has them [ascend] onto an ethereal plane."

Martinez calls Ledford "an amazing visionary.  She sees that the play is more than lyricism. She can extract the realism too."

Road Through Heaven has its first performance at 8 p.m. Friday, then gets its press opening at 8 p.m. Saturday.  The show runs through June 2 at the Roxy Performing Arts Center, 1645 SW 107th Ave., Miami.  Regular performances are 8 p.m. Thursday-Saturday, 1 and 5:30 p.m. Sunday (no evening show this Sunday).  Tickets are $40 ($35 Thursday and Sunday evening).  Students 25 and younger can get $15 rush tickets, based on availability, and the deal on opening weekend is even better:  The first 25 students under 25 get in free.

For information on New Theatre and Road Through Heaven, call 305-443-5909 or visit the company's web site.