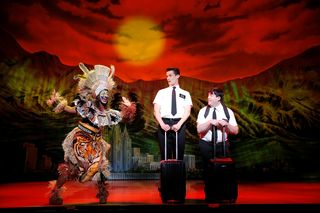 If you’re a South Florida actor-singer-dancer who just might be interested in appearing in one of the hottest shows on Broadway or on tour, the casting folks for The Book of Mormon want to hear from you.

They’re coming to Miami to hold auditions on Friday, Nov. 1, and Sunday, Nov. 3, by appointment only, trying to fatten their files for future replacements on Broadway and the show’s two touring companies.  Mormon wannabes ned to submit a photo, resume and any relevant additional material via email to jrichcasting@gmail.com no later than Saturday, Nov. 2 (sooner, of course, if you’re hoping to be seen on Friday).  Appointments are at the discretion of the casting staff, which will supply detailed information about location and times to those they'd like to see.  Equity and non-union actors can submit, and actors have to be 18 or older.

The show itself, of course, comes to the Broward Center for the Performing Arts  Nov. 26-Dec. 22 as the hottest item on South Florida's Broadway touring menu this season.

Here’s the breakdown of what Rich and company are seeking.

ARNOLD CUNNINGHAM (Early 20's-Late 20's to play 18): Caucasian. Seeking a true character actor. Must be a physical contrast to the other good looking, All-American Mormons. Dweeby, dorky, nerdy, overweight or all four combined. Arnold is a pathological liar but his heart is in the right place. He is a total screw-up but not for lack of trying, he always wants to do the right thing. Must be fantastic comedic actor who sings well. Tenor. We are also particularly interested in comics who sing.

KEVIN PRICE (Early 20’s-Late 20’s to play 18): Caucasian. All-American. Very handsome. Head of the class, always optimistic. Heroic Mormon. Must be a great comedic actor and a fantastic pop-rock high tenor to a B. Should be at least 5’10" or taller.

NABALUNGI (18- Late 20’s to play 20): Black African. Pretty. Takes the hardships of her village very seriously and wants to help her people find a better life. Must have great comic timing. Strong alto. Belt to an E.

ELDER MCKINLEY (early 20s to late 20s to play 18): Caucasian. District leader of the Mormon missionaries in Uganda. All- American, wide-eyed and hopeful. Often struggles to cover his flamboyant tendencies and adhere to his Mormon morals. Must be a fantastic comedic actor and great singer. High baritone who can pop out high B-flats for comedic effect.

MAFALA HATIMBI (40s): Black African. Father of Nabalungi. Has come to accept the hardships in the village where they live but is a discerning community leader and tries to bring joy to their lives. Must be a great comedic actor and singer. Also interested in actors who sing.

PRICE’S DAD/MISSION PRESIDENT/VARIOUS ROLES (40s): Caucasian. All-American good looks and physique. Plays several parts from the picture-perfect head of a Mormon household, to the stern missionary president to Joseph Smith, so must have the ability to be transformative. Must be a great comedic actor and good singer. High baritone to an A-flat.