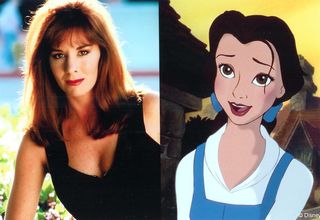 She didn't appear as the bookish, beautiful Belle in Disney's Oscar-winning 1991 smash Beauty and the Beast -- but that's only because the movie was animated.  Take a look at Paige O'Hara's photo, though, and you see that the animators may have drawn some of their inspiration from the woman who gave voice (spoken and musical) to Belle.

On Saturday at 6:30 p.m., the Fort Lauderdale native will be back home as one of two honorees at the Night of Broadway Stars, a benefit for Covenant House, which provides shelter and services to homeless young people.  Produced by Neil Berg, the show will feature performances of Broadway classics by professional singer-actors and some of the Covenant House residents.  O'Hara will perform alongside Broadway-tested talents Alan H. Green, John Treacy Egan, Rita Harvey, Capathia Jenkins, Ted Louis Levy and Natalie Toro.

Honored along with the late Kevin Koenig, co-founder of City Furniture, O'Hara has been dedicated to showbiz since she began acting with the Fort Lauderdale Children's Theater.  She got training at Parkway Middle School and in the arts program at Nova High, then went to New York.  Among her theater roles:  Ellie May in Showboat, Fantine in Les Miserables, Nellie Forbush in South Pacific.

The gala evening takes place at the Broward Center for the Performing Arts, 201 SW Fifth Ave., Fort Lauderdale.  Tickets are $225, and the event includes the performance, dinner and a post-show reception.  Roxanne Vargas of NBC6 will emcee.  For information, contact Elisa Stone of Covenant House at 954-568-7914 or via email at estone@covenanthousefl.org.