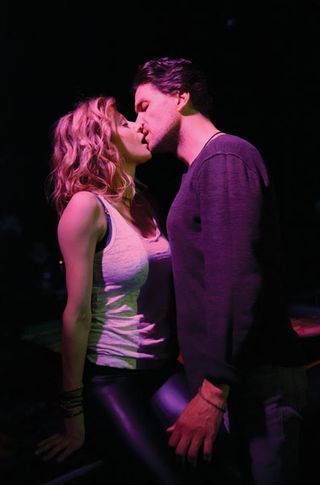 Just as it's getting ready to open this season's big musical -- Monty Python's Spamalot -- Actors' Playhouse in Coral Gables has settled on the six shows for its 2014-2015 season.

First up (Oct. 8-Nov. 2) is the Julia Jordan-Juliana Nash adult rock musical Murder Ballad, a 2013 Off-Broadway hit about a successful New Yorker whose past dangerously resurfaces.  Placing the audience and performers together in a bar setting, the show mixes lust, betrayal and violence.

Tom Dudzick's play Miracle on Division Street is next, running Dec. 3-28.  Set in Buffalo, N.Y., the comedy centers on a matriarch who runs a soup kitchen next to her family's most treasured artifact:  a 20-foot-tall shrine to the Virgin Mary, the subject of a legend that may not be quite accurate.

The Austin Winsberg-Alan Zachary musical First Date will run March 18-April 12, 2015. The 2012 Broadway musical centers on a couple whose blind date at a restaurant morphs to involve friends, exes, parents and more.

The Book Club Play by Karen Zacarias, running May 13-June 7, 2015, is a comedy about that omnipresent social and literary gathering, the book club. When members of one club become the subjects of a documentary, the arrival of a new member shakes up the group dynamics.

Next season winds up with a summer run of Paul Slade Smith's Unnecessary Farce July 15-Aug. 9, 2015.  In addition to the requisite number of doors (eight in this case), this farce involves an embezzling mayor, a hit man, an accountant who keeps shedding her clothes and a couple of eavesdropping cops.

Subscriptions to the new season are now on sale.  Prices range from $203 for preview performances to $453 for gala opening night tickets, which include pre- and post-show parties.  Subscriptions to Wednesday or Thursday evening performances and Sunday matinees are $257; Friday and Saturday evening subscriptions are $293.  Special VIP/flexible, student and young professional packages are also available.

(Photos of the New York productions of Murder Ballad and Ragtime by Joan Marcus.)