Art takes on a deeper purpose in 'The Dana Plays' 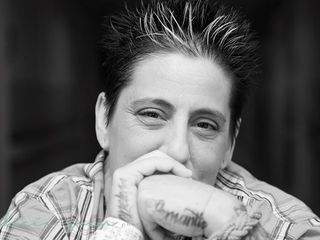 Dana Castellano has been a familiar figure in South Florida's theater community for a number of years, from the time she was in a long relationship with an actress until the present day, when her real-life drama is rivaling almost anything you could see on stage.

In January, Castellano was diagnosed with Stage 4 cervical cancer, and she has literally been engaged in the fight of her life ever since.  She has endured the surgery, the chemo, the radiation, the treatment-caused illness like the feisty warrior she is.  When she learned what she was facing, she invited family and friends (many via Facebook) to join her on "Team Chaos," an unofficial support group whose motto is, to paraphrase, screw cancer.

A woman with lots of body art and piercings, Castellano decided to turn what might be an otherwise traumatic part of cancer treatment -- shaving her head -- into a party.  She invited friends in the theater community, including Antonio and Katherine Amadeo, the couple behind The Naked Stage and the 24-Hour Theatre Project.  And there, the idea for The Dana Plays -- a benefit with an artistic twist -- took shape.

"I said, 'Let's  do it. Let's take theater and use it to raise awareness.'  Antonio is so fast, he just ran with it. I'm just speechless.  It blows me away how not even an hour-long conversation could blow up to become something so huge," says Castellano, 45.

For his part, Amadeo says, "Dana wanted us to consider doing a large fundraiser...that would raise awareness and funds for the American Cancer Society, since they had done so much for her during this tough time.  She was so excited by the idea. Of course we said yes."

What has evolved is an evening of original short plays by South Florida writers to be presented in a one-time-only event at 8 p.m. Monday.  Miami Theater Center, 9806 NE Second Ave., Miami Shores, is hosting the evening, and the South Florida Theatre League is presenting the program, which will raise funds for both Castellano and the American Cancer Society.

"What I love about The Dana Plays is that it is not only another place where the community can band together, but it's one where we're focusing on something bigger than just our artistic community," says Andie Arthur, executive director of the Theatre League and one of the evening's playwrights.

And participation by the theater community is vast.  Works written for the occasion are So I Was Wondering by Christopher Demos-Brown, Lyd by Jessica Farr, The Purple Troll by Tony Finstrom, F**k You, Cancer! by Avi Hoffman, The Opponent by Michael McKeever, Wearing Hope by Deborah  L. Sherman, Ex-Communication by Matt Stabile, We're in the Money by Paul Tei, Be Nice to Me, My Girlfriend Has Cancer by Arthur and one more by Demos-Brown.

Through her work as a board member of The Women's Theatre Project, Castellano has become a contributing member of the theater community, a person with a deep passion for the art form.

"The more I was around theater, the more I loved it.  You see an amazing show and use your imagination, which is something we lose just going to the movies," Castellano says.

And of the Amadeos, she says, "They are the dynamic duo of theater, Batman and Robin."

The inspiration for The Dana Plays will be in the audience on Monday with her friends and extended family.  She's ready to use her imagination, ready for whatever she sees.

"It will be hard to watch these plays.  But I'll be sitting there with a handkerchief or a box of Kleenex," she says.

Admission to The Dana Plays is $15, with additional donations welcome.  For information, call 305-751-9550 or email Andie Arthur at andie@southfloridatheatre.com.