As spring nears, 'tis the season to announce seasons

Despite the chill in the air, theaters around South Florida are looking to create some heat at the box office by announcing their 2015-2016 seasons, enticing current subscribers to renew and wooing new ones.

So what will Palm Beach Dramaworks in West Palm Beach, the Maltz Jupiter Theatre, the Wick Theatre in Boca Raton and the Stage Door Theatre in Margate be producing for 2015-2016?  Happy to share. 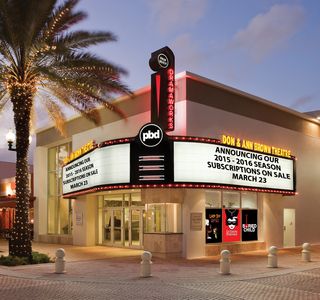 Dramaworks, which earlier this week announced that its concert-style summer musicals would be Stephen Sondheim and Hugh Wheeler's A Little Night Music (July 9-19) and the Harvey Schmidt-Tom Jones-N. Richard Nash musical 110 in the Shade (Aug. 13-23), today revealed its new season.

Like Dramaworks, the Maltz Jupiter Theatre is a heavily subscribed company, so going for a season subscription isn't a bad idea at all.  A couple of plays and three big musicals will be featured on the Maltz mainstage, starting with Agatha Christie's classic whodunnit The Mousetrap (Oct. 25-Nov. 8).  Next is Billy Elliot the Musical (Dec. 1-20), then The Will Rogers Follies (Jan. 12-31).  The season ends with Peter Morgan's Frost/Nixon (Feb. 7-21) and Cole Porter's Kiss Me, Kate (March 8-27, 2016).  The Maltz is at 1001 E. Indiantown Rd. in Jupiter. Call 561-575-2223 or visit the theater's web site.