City Theatre cooks up a musical 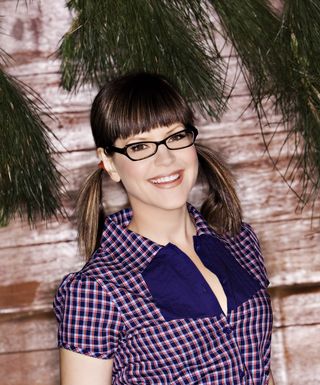 As City Theatre gears up for its 15th anniversary Summer Shorts festival in Miami in June, the company is focusing on something not-so-short for July.

Working from an idea by City producing artistic director Stephanie Norman, Grammy-nominated singer-songwriter Lisa Loeb and playwright Marco Ramirez are collaborating on the new musical Camp Kappawanna.  The show tells the story of 12-year-old Jennifer Jenkins, who is going away to summer camp, thus leaving home for the first time.

The family-oriented show is to debut July 1-3 at Nova Southeastern University (exact details to come), but you can get a sneak peek this Sunday at a family fun day sponsored by Temple Dor Dorim, 2360 Glades Circle in Weston.  Pizza (at $2 a slice) and an art contest happen at 11 a.m., with the free preview at noon. The event is open to the public.

A musical, a play, a reading 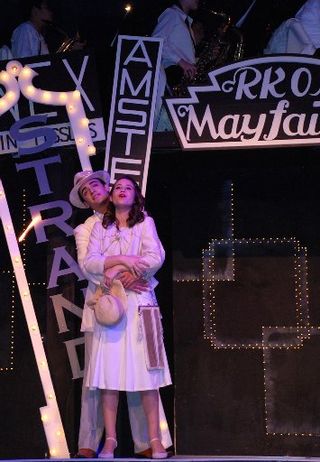 Students from 10 to 22 star in the show, which features accompaniment by the Greater Miami Youth Symphony.  The show runs through March 28 at the Roxy Performing Arts Center, 1645 SW 107th Ave., Miami.  Tickets are $20 (tonight's gala, which includes an after-party and benefits Roxy's scholarship fund, costs $50).  Regular performances are 8 p.m. Friday-Saturday, 7 p.m. Sunday (final Sunday show is at 3 p.m.).  Call 305-226-0030 or visit the Roxy web site for info.

Former stand-up comic Frannie Sheridan brings her solo show -- Confessions of a Jewish Shiksa: Dancing on Hitler's Grave! -- to Miami Beach's Colony Theater for two performances this weekend.  Sheridan's parents, both Holocaust survivors, escaped to Canada and, after an anti-Semitic attack, converted to Catholicism.  Years later, Sheridan discovered the truth about her heritage, a truth she explores in the show.

Check out a free reading of Bag of Stones, a play written and directed by Richard Janaro, on Monday at 7:30 p.m. at GableStage.  The plot is sizzling (and, in South Florida, familiar-sounding):  A Catholic priest continues to have a relationship with his high school girlfriend, who is now grown up and married.  Nick Duckart, Scott Genn, Betsy Graver, David Hemphill, David Kwiat and Harriet Oser are in the cast. GableStage is in the Biltmore Hotel at 1200 Anastasia Ave., Coral Gables. Call the box office at 305-445-1119 or visit the theater's web site for info.

A free musical at Barry 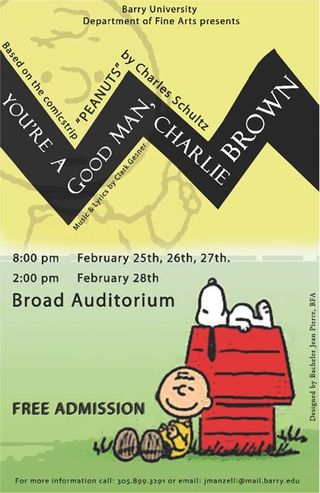 It isn't unusual for a play reading to be free.  But a lavishly designed musical? That's something special.

From Thursday through Sunday, Barry University's Department of Fine Arts is presenting the 1999 Broadway version of You're a Good Man, Charlie Brown.  The original Clark Gesner-John Gordon musical, which features the core gang from Charles M. Schultz's Peanuts comic strip (Lucy van Pelt, her brother Linus, Schroeder, Sally Brown, Peppermint Patty, Snoopy and the man himself, Charlie Brown), got an update with new dialogue by Michael Mayer and additional songs/orchestrations by Andrew Lippa. 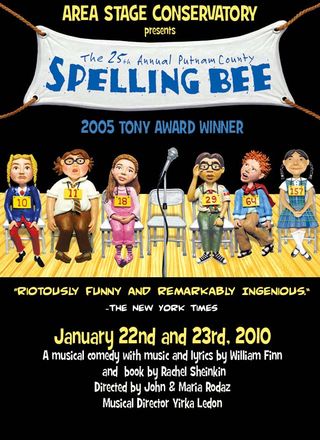 When The 25th Annual Putnam County Spelling Bee became a surprise success Off-Broadway, on Broadway and on tour, the kids in the show's fictional spelling bee were played by a succession of talented adults.

Of course, there's always the chance to show off your own spelling skills, since four audience "volunteers" are recruited before every performance.  Bad spellers beware!

The Grand Opening Cabaret at the Little Stage Theater on Miami Beach, which opened New Year's night, also enjoyed success -- so much so that the run has been extended through this weekend.  Additional shows happen at 9 p.m. this Friday and Saturday at 2100 Washington Ave.  Admission to the SoBe Arts tribute to '30s-'40s cabarets is $25.  For info, call 305-674-9220 or visit the group's web site.

Though there's nothing wrong, nothing at all, with the ubiquitous holiday ballet The Nutcracker (particularly Miami City Ballet's beautiful production), South Florida theater fans young and old have several non-dance options for their post-Thanksgiving entertainment. 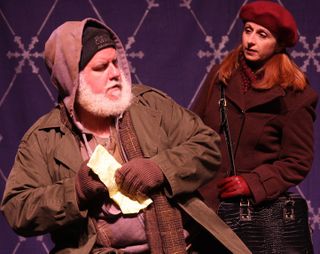 The most intriguing looks to be the two-character musical Another Night Before Christmasat Actors' Playhouse in Coral Gables.  Written by Sean Grennan and Leah Okimoto, whose Married Alive!was a summer hit at Actors', the show stars Carbonell Award winners Irene Adjan and Ken Clement -- she plays a lonely social worker, he's a homeless guy who may or not be Santa Claus.

* Also at Actors', the musical Madeline's Christmas is running in the large downstairs theater on Saturdays through Dec. 26.  The family show has performances at 2 p.m. each Saturday, with extra public performances at 5 p.m. Dec. 20 and Dec. 24.  Tickets are $15. *  If you can't wait to kick off Christmas and have a slightly more adult/askew sensibility, remember that Scrooge in Rouge starring Ricky Graham, Varla Jean Merman and Yvette Hargis will be performed live at Cinema Paradiso, 503 SE Sixth St., Fort Lauderdale, Friday-Sunday at 8 p.m., Saturday-Sunday at 2 p.m.  Tickets are $40 ($30 for members of the Fort Lauderdale International Film Festival. Call 954-525-3456 or visit the film fest site. 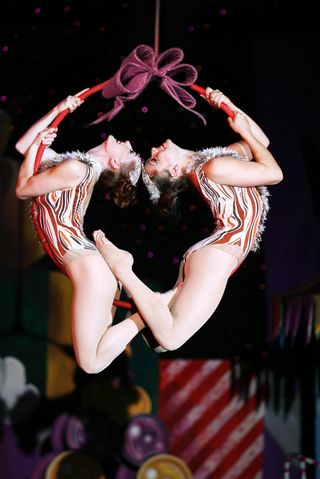 If you've been in almost any kind of store lately, you know that holiday decorations (which used to show up a few weeks before Thanksgiving) have been piled on shelves since way before Halloween.

So it shouldn't come as a surprise that Cirque Dreams Holidaze, a new show from Neil Goldberg and the folks that took Cirque Dreams Jungle Fantasy to Broadway, is bringing some early holiday cheer to Hard Rock Live at the Seminole Hard Rock Hotel & Casino tonight through Sunday.

The family-oriented show, featuring a cast of aerialists, acrobats, singers, dancers and musicians, serves up everything from snowmen to toy soldiers to a 24-foot-tall "magical" Christmas tree.

Spooky tales and a new play 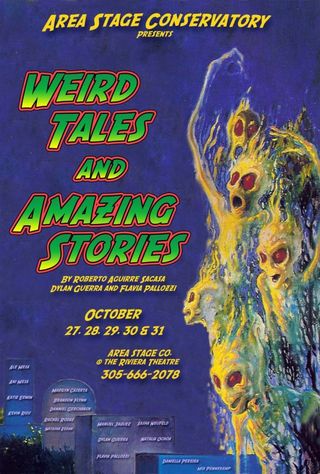 Area Stage's Conservatory has come up with a Halloween week double header:  a haunted house and a program of short plays and musical numbers aimed at middle schoolers and high school students.

If you're a grown-up theater lover looking for something new and different (and free) to experience tonight, head on over to New Theatre at 4120 Laguna St. in Coral Gables.  The company is doing a reading of Kirk Citron's play But Not for Lunch.  The play is about a successful attorney who retires and wants his younger wife to do likewise, but she doesn't agree.  For info, call 305-443-5909 or visit New Theatre's web site. 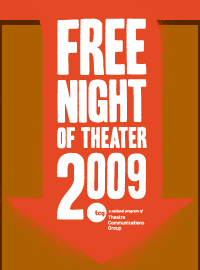 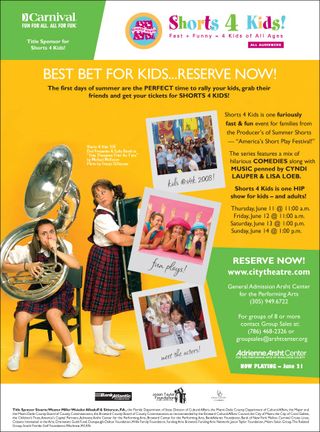 Though the kids are barely out of school for the summer, we're betting that more than a few parents have already heard that familiar yelp: "I'm bored!"

So take them to the theater already.

Theater for the kids 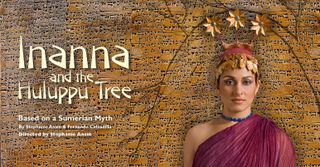 With schools slashing positions for arts teachers, it's more important than ever for parents to take advantage of the enrichment exposure to theater, dance, music and the visual arts can bring to a child's creative and intellectual development.

This week brings three opportunities for kids to see shows and even interact with theater professionals.  At the PlayGround Theatre in Miami Shores, Stephanie Ansin and Fernando Calzadilla's Inanna and the Huluppu Tree is running through May 22.  Based on a Sumerian myth, it tells the story of a young goddess who restores harmony to a city besieged by storms and angry deities.  On Saturday, May 2, from 10 a.m. to 1 p.m., the theater is holding a Behind the Curtain workshop.  For $70, kids can learn about all the elements of the show and get two tickets to any performance.  Regular tickets to Inanna are $15.  The PlayGround is at 9806 NE Second Ave., Miami Shores. Call 305-751-9550 or visit the theater's web site for more information. 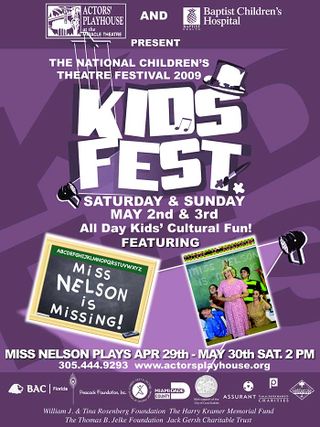 At Actors' Playhouse in Coral Gables, this weekend brings the 14th annual National Children's Theatre Festival.  The key productions this year are the musical Miss Nelson Is Missing and the Caribbean-flavored Once on This Island Jr.  Kids also get hands-on experiences at "hall pass" stations, hear selections from the musical Mary Poppins and interact with characters from Alice in Wonderland.  Miss Nelson runs  through May 30 at 2 p.m.each Saturday, but the festival happens Friday-Sunday, May 1-3.  Tickets to three different combinations of shows and activities are $15 each. Actors' Playhouse is in the Miracle Theatre at 280 Miracle Mile.  Call 305-444-9293 or visit the web site for detailed information. 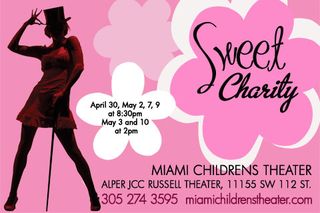 Another theater experience, this one for older kids, is the Miami Childrens Theater production of the musical Sweet Charity.  Kids and teens are the stars of MCT's productions, playing Charity, the dreamer of a dance hall girl, and her Manhattan pals.  Shows are at 8:30 p.m. Thursday and Saturday, 2 p.m. Sunday through May 10.  The company performs at the Alper Jewish Community Center's Russell Theater, 11155 SW 112th Ave., Miami.  Call 305-274-3595 or visit the MCT web site for information.