Theater greats get an ultimate honor

Baseball has Cooperstown, football has Canton, rock and roll has Cleveland.  American theater has its own Hall of Fame, names etched on the walls of Broadway's Gershwin Theatre at 222 W. 51st St., the place where hundreds of thousands of musical fans have flocked to see Wicked. 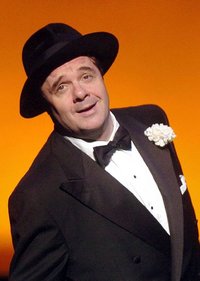 The latest group of inductees has just been announced, and Producers star Nathan Lane (who is expected to be on Broadway this season opposite Bill Irwin in a revival of Samuel Beckett's Waiting for Godot) is among the stage greats being honored.

Honorary chair is Palm Beach resident and former Broadway actress Dame Celia Lipton Farris; mistress of ceremonies is 2007 honoree Dana Ivey. The ceremony takes place in the Gershwin's North Rotunda at 7:30 p.m. Jan. 26, with a celebratory supper at the Friars Club to follow.  For a list of all Hall of Fame inductees, check out the Best Plays Yearbook online. 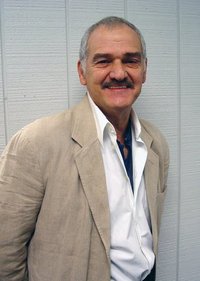 Max Ferra, the founder of New York's INTAR Hispanic American Arts Center, liked Luis Santeiro's first play -- Our Lady of the Tortilla -- so much that he staged its world premiere at his Manhattan theater in 1987.

Fast forward to 2008.  Santeiro, a writer of the vintage bilingual TV series Que Pasa, U.S.A.? from 1977 to 1979, is still doing Emmy Award-winning work as a longtime writer for Sesame Street, still turning out plays.  And Ferra is now running the Actor's Arena, a bilingual theater training program at Miami Dade College's North Campus.

In celebration of Hispanic Heritage Month, Ferra is staging the Miami premiere of Our Lady of the Tortilla, which Santeiro has altered so that the comic chaos takes place in Hialeah instead of the original New Jersey setting.  During one crazy weekend, a Cuban-American college kid named Nelson (Bryant Del Toro) brings home his southern belle girlfriend Beverly (Monica Abreu) to meet the family, which prompts Nelson's sleazy brother Eddy (Logan Fernandez)  to hit on her.  Mama Dahlia (Alejandra Cossio) is determined to keep her straying hubby from seeing his new squeeze. Her sister Dolores (Lizaida Mansito) spies the image of the Virgin Mary in a tortilla, setting off a mad media frenzy. 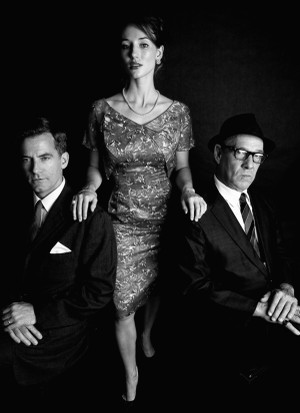 With just over three weeks to go until the presidential election, and with both campaigns now slinging mud, you could be forgiven for thinking that politics are a dirty business.

William Mastrosimone, the Emmy Award-winning playwright and screenwriter, apparently thinks so too.  His newest play, Dirty Business, gets its world premiere at Manalapan's Florida Stage next week.

The script is both scorching and riveting.  And if the characters' names -- Jack, Sam, Judy, Frank and Joe -- make you think of a young senator who ran for president in 1960, a mob boss, the beautiful woman who bedded them both, a famous singer and the senator's manipulative father, so be it.  History, with its secrets and differing perspectives, clearly inspired Mastrosimone's play.  But he takes us deeper, inside the minds of people obsessed with sex and power (not necessarily in that order).

Florida Stage's Louis Tyrrell is directing Dirty Business, which features James Reynolds as Jack, Elizabeth Davis as Judy and Gordon McConnell as Sam.  Previews begin Oct.22 at 8 p.m. (additional previews at 2 and 8 p.m. Oct. 23).  The play runs through Nov. 30, with performances at 8 p.m. Wednesday-Saturday, 2 p.m. Wednesday and Saturday-Sunday, 7 p.m. Sunday.  Tickets are $42 and $45 ($35 for previews).  Florida Stage is at 262 S. Ocean Blvd. in Manalapan (south of Lake Worth in Palm Beach County). For information, call 1-800-514-3837 or visit the theater's web site. 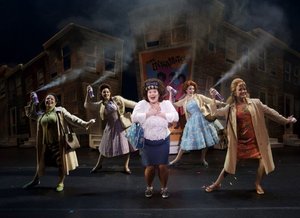 John Waters' Hairspray is the movie that became a Broadway musical that became a movie musical. The bubbly, tongue-in-cheek stage version is headed back to South Florida.  Winner of the 2003 Tony Award as best musical, Hairspray has been here before, and it's not part of the official touring Broadway lineup at the Broward Center for the Performing Arts.

But its short run (Oct. 17-19) does usher in a season's worth of big Broadway musicals coming to the Broward Center, the Adrienne Arsht Center for the Performing Arts in Miami and the Kravis Center in West Palm Beach.  Will star Brooklynn Pulver (pictured here with hairspray-wielding dancers) will be a memorable Tracy Turnblad?  We'll see. But one thing is for sure: You can never hear Marc Shaiman and Scott Wittman's homage-to-the-'60s score too often. 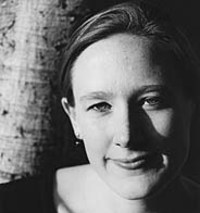 Playwright and MacArthur "genius" fellowship winner Sarah Ruhl has a varied body of work, little of it (except for The Clean House, done by Boca Raton's Caldwell Theatre Company) seen in South Florida -- until now.  Her most recent play, Dead Man's Cell Phone, will be produced by Plantation's Mosaic Theatre Feb. 26-March 22, 2009.

This weekend, though, Florida Atlantic University is offering a demonstration of Ruhl's gift for crafting a play rooted in mythic literature.  Eurydice, Ruhl's retelling of the Orpheus myth from the perspective of his bride, finishes its run on the Boca Raton campus with performances at 8 p.m. Friday and Saturday, 2 p.m. Saturday and Sunday.  In Ruhl's version, after Eurydice's death on her wedding day, she travels to Hades and reunites with her father.  When Orpheus risks all to fetch her, she must decide whether to return to life with her husband or remain in the land of the dead with her father.

Tickets to the FAU production are $16 ($10 for faculty and alumni, free to students), and the show is in the Studio One Theatre on the campus at 777 Glades Rd.  For information, call 561-297-3810 or visit the university's online ticketing site. 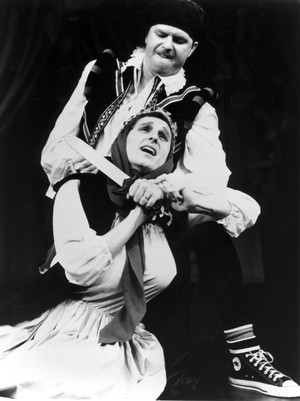 Cruz gets a movie deal Nilo Cruz, the Pulitzer Prize-winning author of Anna in the Tropics, grew up in Miami after leaving Cuba on a Freedom Flight in 1970.  Now, he'll help to tell the cinematic story of another prominent Cuban exile:  Alina Fernandez Revuelta, the daughter of Fidel Castro.

Cruz, the first Latino to win the Pulitzer for drama, will coauthor the screenplay for Castro's Daughter with Bobby Moresco, who is also producing and directing the film.  Moresco produced the 2004 movie Crash and shared the screenwriting Oscar with Paul Haggis; he also coproduced Clint Eastwood's Million Dollar Baby.

Fernandez, who hosts the radio talk show Simplemente Alina on Miami's WQBA (1140 AM), fled Cuba for Spain in 1993 disguised as a Spanish tourist, later settling in Miami.  Castro's Daughter is budgeted at $20 million and is expected to begin production in 2009.

(Photo of Fernandez and Cruz)

Posted by Christine Dolen at 1:12 PM in Playwrights | Permalink | Comments 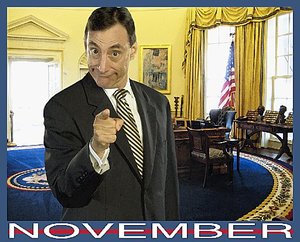 A star and a producer, together again

During the 25 years that Arnold Mittelman was producing artistic director of the still-shuttered Coconut Grove Playhouse, award-winning actor and singer Theodore Bikel appeared at Miami's oldest regional theater a number of times.  He was there in The Disputation in 1999, back later that year in The Gathering, starred in The Chosen in 2004 and was part of the theater's final season as the star of About Time (opposite Patricia Conolly) in 2006.

When Mittelman learned that Bikel would be premiering Sholom Aleichem: Laughter Through Tears at Washington D.C.'s Theater J Dec. 17-Jan. 11, he persuaded Bikel to follow that run with one at Fort Lauderdale's Parker Playhouse.  Bikel, pianist Tamara Brooks and Bosnian accordion player Merima Kljuco will appear at the Parker Jan. 28-Feb. 1, 2009, under the auspices of Mittelman's two not-for-profit companies, The American Theater Festival and the National Jewish Theater.  Last season, Mittelman presented The Soul of Gershwin (a show he had brought to the Grove in 2002) at the Parker, and he plans to bring it back again Nov. 12-23. 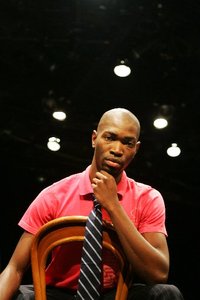 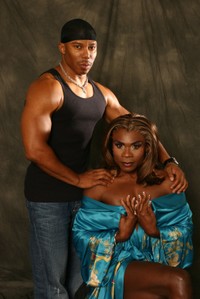