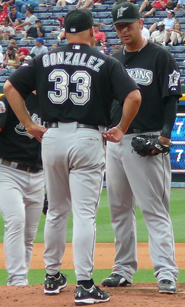 JUPITER -- The Marlins have extended manager Fredi Gonzalez's contract through the 2011 season. The announcement was made Tuesday by Larry Beinfest, the Marlins' president of baseball operations.

Gonzalez, 45, was entering the final year of a three-year contract when he agreed to the extension.

"We feel like everything's headed in the right direction here with him at the helm," Beinfest said.

Said Marlins owner Jeffrey Loria in a prepared statement: "Fredi's ability to work closely with our players and staff has made us a better organization and I look forward to future success with Fredi at the helm."

Gonzalez, who was born in Cuba and raised in Miami, took over as manager after Joe Girardi was fired following the 2006 season.

Players were told about Gonzalez's new contract just before they took the field for their first full-squad workout of spring training.

Gonzalez said Loria offered him the extension on Saturday.

The 2007 Marlins went 71-91 in what was Gonzalez's first year managing a major league club before improving to 84-77 last year.