Geoff Jenkins Could Wind Up on Marlins Radar


The Marlins, who are sniffing around for a lefty bat off the bench  might have some interest in Geoff Jenkins, who was released Tuesday by the Phillies. The 34-year-old corner outfielder threw up some pretty consistent numbers year after year with the Milwaukee Brewers, but saw those figures dip in a less-prominent role with the Phillies last season.

Perhaps more enticing to the Marlins: Philly is on the hook for the remainder of his contract, which calls for him to receive $6.75 million this season and a $1.25 million club-option buyout in 2010. From the Marlins' perspective, he could be this year's version of Luis Gonzalez -- only seven years younger. Gonzalez, who is still floating out there as a free agent, has been linked again to the Marlins. But I'm told the interest in him is "minimal" and that Jenkins would be a more intriguing option.

Sports Illustrated Not Impressed With Marlins


Sports Illustrated's annual baseball preview issue hits newstands on Wednesday, and the mag's opinion of the Marlins is not great. 2009 prediction: a 77-85 record and fourth-place finish in the NL East, just ahead of the Nationals. (They have the Mets finishing ahead of the World Series champion Phillies for the division crown).

Not surprisingly, SI points to the Marlins' leaky defense as a big negative. On the plus side, SI gushes praise on the starting pitching staff.


Gaby Sanchez began spring training as the favorite to win the first base job. But the Marlins have since fallen head over heels for Emilio Bonifacio, and that changed everything.

Sanchez and right-handed pitcher Burke Badenhop were optioned to Triple A New Orleans on Tuesday.

The decision means the Marlins will go with Bonifacio at third base and move Jorge Cantu across the diamond to first base.


JUPITER -- Just finished watching Matt Lindstrom complete a bullpen throwing session, the next step in the closer's return from a mild case of rotator cuff tendinitis.

.       Lindstrom is scheduled to throw to live hitters on Tuesday, either in batting practice or a spring training game. If all goes well this coming week, Lindstrom could be ready to go Opening Day.

Posted by Clark Spencer at 11:16 AM | Permalink | Comments

But the Marlins finally made a move to get a backup catcher.

Ronny Paulino is the answer.

Paulino was part of  two separate trades within about a four-hour span late Friday night and landed in Florida after he was shipped from the Phillies to the Giants. The Marlins sent minor league right-handed pitcher Hector Correa to the Giants for a little peace of mind to back up starter John Baker.

This move is just another reminder of how things have yet to work out in that huge trade with the Tigers that sent Miguel Cabrera and Dontrelle Willis to Detroit for six players.

Cameron Maybin has all the potential to turn into an All-Star centerfielder, and I still believe Andrew Miller will be successful lefty who can win 12 to 15 games.

But the bottom of that list from Detroit has been pretty sour. We’re still waiting to see if Burke Badenhop can stick in the big leagues, but at least he has a ceiling.

Rabelo has been a total bust. The idea was for this guy to grow into the starting catcher’s role, and the Marlins gave him every opportunity last year.

The Marlins, who had kept Baker buried in the minors, finally had to give him a look last year when injuries forced the club to call him up.

Of course, Baker has been one of the biggest surprises on this team and everyone in the organization looks brilliant because of his success.

Pudge (Ivan Rodriguez) would have been an ideal guy to come in here and be the No. 2 catcher. His experience would have been invaluable to Baker. The problem with signing Pudge was simple. Pudge wants to be an every day catcher, and that just wasn’t a fit in Florida.

So now the Marlins have Paulino, a guy who has had more than 1,000 at-bats in his four seasons in the big leagues. He’s a career .278 hitter, who will be the Sunday afternoon catcher and give Baker a breather now and then.

Personally, I like LoDuca. So does the Marlins owner, but there are some mixed opinions about LoDuca in this front office, and that’s why he never had a chance last year when he played here briefly.

Posted by Mike Phillips at 11:43 AM | Permalink | Comments

Marlins Get Ronny Paulino in Trade


Some late-night trade news for the Marlins, who resolved their backup catching situation by acquiring Ronny Paulino from the San Francisco Giants for minor-league right-handed pitcher Hector Correa.

Paulino had been traded to the Giants from Phildelphia late Friday for left-handed pitcher Jack Taschner. He was then traded two hours later to the Marlins. Paulino played last season for the Pittsburgh Pirates. After joining the Phillies, he became expendable when Philadelphia elected to go with Chris Coste as their backup.

The Marlins have had their eye on Paulino since the winter meetings in December, and they also had discussions with Ivan Rodriguez about the backup job. But Rodriguez ended up signing with the Houston Astros.

Paulino hit .310 for the Pirates as Pittsburgh's full-time catcher in 2006 and .263 with 11 home runs in 2007. But he battled weight problems last season and hit just .212, prompting Pittsburgh to trade him to Philadelphia..

Paulino has also struggled at the plate this spring..

Posted by Clark Spencer at 1:20 AM | Permalink | Comments

Don't know how many people saw this recent New York Daily News story on Mets second baseman Luis Castillo, but it contains a piece of sobering new information about the former Marlins Gold Glover. Castillo revealed for the first time that an older brother died during the 2003 World Series and that the only people he told were a few teammates. 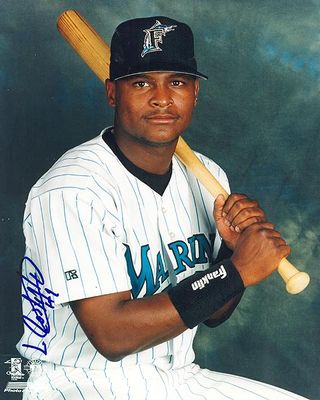 In 2003, during the Marlins' second World Series, Castillo's older brother died of a heart attack after a game. Castillo confided in a few teammates but never disclosed anything publicly. Only now is he finally revealing it. He continued playing in the World Series without interruption. Since then, Castillo draws a cross in the dirt behind the catcher before his first at-bat every game.

"I felt bad inside," Castillo said. "We were in the World Series and I was in a hard situation. I couldn't miss any games. I didn't tell anybody. If it was in the news, maybe I had to go. That was hard for me. I wanted to go."

I've spoken to '03 Marlins manager Jack McKeon, former infielder Andy Fox and then-infield coach Perry Hill about the story, and none of them knew a thing about it. Hill, who was especially close to Castillo (he gave Hill one of the three Gold Glove awards he won with the Marlins), was shocked by the revelation.

"That's a stunner," said Hill, who is now the infield coach for the Pittsburgh Pirates. "What a burden to carry on such a high stage. I'm trying to think of his demeanor at the time -- Luis is always happy-go-lucky -- but I can't recall noticing anything different. It had to be weighing on his mind. Wow. That's shocking."

Though the story doesn't specify when exactly his brother died, it could help to explain Castillo's poor offensive showing in the '03 Series He hit just .154 (4 for 26), did not draw any walks, struck out seven times, and scored only one run. True to form, though, Castillo did not commit any fielding errors.

Posted by Clark Spencer at 11:11 AM | Permalink | Comments


The Marlins have traded right-handed pitcher Frankie De La Cruz to the San Diego Padres for cash and a player to be named later.

De La Cruz was one of six players the Marlins obtained from the Detroit Tigers in the Miguel Cabrera/Dontrelle Willis trade in December, 2007.

De La Cruz, who is out of options, is expected to make the Padres' 25-man roster.

The hard-throwing 25-year-old went 13-8 at Triple A Albuquerque last season but struggled in his six outings -- including one start -- for the Marlins. In those games, De La Cruz had an ERA of 18.00 and walked 11 in just nine innings.

Proctor Aiming for May 1 Return


JUPITER -- Spoke this afternoon with reliever Scott Proctor, who is blaming himself for his latest elbow setback, one that'll cause him to miss not only Opening Day, but most likely the entire first month of the season.

"A lot of it comes down to I should have known better, should have held off," said Proctor, who isn't throwing because of loose scar tissue directly related to elbow surgery last September. "I aggravated it more by trying to do too much, trying to get back. But I've only got one gear, and that's usually a fifth gear. If we've only got five, it's six."

Proctor appeared in only one spring training game for the Marlins before they shut him down. He resumed a long-toss program, but was shut down once more when problems continued. He said he probably won't resume throwing for at least the next 10 days.

"I'm going to miss the first part of the season, but what we're trying to do is cut down the time (it takes to return)," said Proctor, who was projected to be a key member of the bullpen after being acquired as a free agent in December. "May 1 is definitely my target date."

But Proctor said team officials have told him it could take longer.