The Marlins weren’t happy with the way the Mets took their sweet time Wednesday getting pinch hitter Omir Santos to the plate with the game in the balance in the bottom of the ninth. And now, apparently, they’re doing something about it.

“We will talk to major league baseball about it,” manager Fredi Gonzalez told reporters before Thursday’s game at Wrigley Field. “I don’t know if you can do anything, I don’t know if you can get a clock on it. It’s gamesmanship. But Larry [Beinfest] is going to write a letter. We’ll see where it goes from there.”

A few minutes ticked away Wednesday with closer Matt Lindstrom on the mound waiting for someone to step out of the Mets' dugout with the bases loaded and two outs in the bottom of the ninth. Santos, who was in the bullpen catching, finally made it to the plate and popped out to shortstop to end the game. The Marlins won 4-3.

But apparently, there was more to the story after all. Mets manager Jerry Manuel acknowledged afterward he went with Santos on purpose – because he was indeed trying to throw Lindstrom off his game. According to the New York Times, Santos stopped on the long way in from the Mets bullpen and took six or seven swings in the clubhouse to stretch it out further.


The hand remains swollen and Hanley Ramirez remains out of the Marlins lineup as they open a 4-game series at Wrigley Field tonight against the Chicago Cubs. Ramirez said he would try to swing a bat today for the first time since Monday when he was struck by a John Maine pitch.

NEW YORK – The streaky Marlins are back on a roll.

Well, a miniature one, anyway.

On Wednesday, one day after snapping a 7-game losing streak, they won their second straight with a 4-3 victory over the New York Mets at Citi Field.

Cody Ross drove in the tying and go-ahead runs with a single in the eighth, and Matt Lindstrom survived a shaky ninth, loading the bases before recording the final out for the save.

The Marlins took a 2-0 lead in the first on a sacrifice fly and a Jorge Cantu home run off Mets ace Johan Santana. Cantu helped end his team’s long losing streak Tuesday with a pair of homers.

But the Mets clawed back against Marlins starter Josh Johnson, eventually tying the score in the fourth on Ramon Castro’s RBI single. Fernando Tatis put the Mets ahead, 3-2, in the sixth with a leadoff homer.

New York’s bullpen, which failed to protect a Mets lead on Tuesday, faltered again on Wednesday once Santana was lifted after the seventh.

After J.J. Putz gave up back-to-back walks to start the eight and Robby Paulino advanced both runners with a sacrifice bunt, Ross stroked a 2-run single into center to put the Marlins back on top, 4-3.

The Marlins have now won four out of six games against the Mets this season. 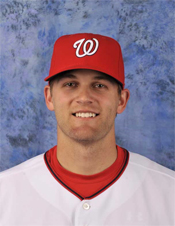 The Marlins have traded Logan Kensing to the Nationals for minor-league pitcher Kyle Gunderson, a right-hander.

Kensing was designated for assignment on Sunday.

The Marlins have assigned Gunderson to Single A Jupiter. The Nationals drafted Gunderson out of Rice University in the 48th round of the 2007 amateur draft.


NEW YORK -- Didn't expect Johan Santana to give up a pair of runs in the first, or for Mets to respond quickly with a run off Josh Johnson in their half of the inning. Wasn't this supposed to be a pitcher's duel -- Johnson vs. Santana The Sequel?

Looks like Jorge Cantu is locked in, as he followed last night's 2 HR game with a solo shot in the first. His ball landed in the first row of seats in left, just as his second homer did last night. But they all count the same.

The Mets brought the infield in after Cameron Maybin tripled with one out in the first, a clear indication that Jerry Manuel anticipates a low-scoring game.

Still no word, by the way, on when Hanley Ramirez will return to the lineup. It's not surprising he's back in the dugout today as his right hand remained swollen last night. His reponse to my question this morning -- Do you think you'll play tomorrow in Chicago? -- was "maybe." Not a lot to hang a hat on, in other words.

Ramirez, Uggla Not in Lineup, Bonifacio at 2B


NEW YORK -- Hanley Ramirez remains out of the lineup, not surprisingly, with his bruised right hand and wrist. He'll have company in the dugout for a matinee showdown of two stud pitchers, Josh Johnson and Johan Santana. Dan Uggla and his 1 for 17 lifetime figure against the Mets ace receives his first day off this season.  Emilio Bonifacio slides over to second, though it should be noted that he hasn't done a whole lot better than Uggla when facing Santana. He is 0 for 8 against the star lefty. Wes Helms will play third.

Carlos Delgado (hip) and Luis Castillo (back spasms) remain out of the lineup for the Mets.

Posted by Clark Spencer at 10:16 AM | Permalink | Comments


NEW YORK -- The losses continue to pile up -- seven in a row at the moment -- but the Marlins still have a ways to go to reach the club record of 11 consecutive defeats, which was accomplished twice during the 1998 campaign. This is the longest stumble the club has experienced since the '07 season.

-- Hanley Ramirez's hand remains swollen, he's not in tonight's lineup, and manager Fredi Gonzalez gives him about a 50-50 chance of playing Wednesday when the Marlins take on Johan Santana. Judging from the looks of the hand, I have serious doubts whether Ramirez will be available for that game, either. He didn't swing a bat today, isn't available for pinch-hitting (I assume he could pinch-run, if necessary), and can't be inserted as a defensive replacement since it's the throwing hand we're talking about. He was able to squeeze his fingers and make a fist for the first time today, but my guess is he won't see action until the Marlins get to Chicago on Thursday for the Cubs series.

-- Don't blame defense for the Marlins' swoon. They've had their issues with hitting and pitching during the slump -- hitting most of all, and the resulting failure to score runs -- but they've remained relatively consistent in the field. They've made almost half as many errors (11) as their opponents (20). "We haven't had one of those 3-error games yet," Gonzalez said.

-- Andrew Miller (15-day DL, oblique strain) threw a side bullpen session on Monday. Gonzalez said he'll probably make a rehab start in the minors at some point before he rejoins the Marlins staff.

-- It's hard to make a clear assessment of the Marlins, what with the 11-1 start to begin the season and the current 7-game losing streak that's taken some of the starch out of their sails. "Sooner or later it's going to balance," Gonzalez said. "and we're going to find out where our needs are going to be."

-- Gonzalez is going with the 1-2 combo of Bonifacio and Maybin at the top of the lineup tonight even though both players are struggling and striking out often. Alfredo Amezaga (starting at shortstop in place of Ramirez and batting eighth) was a possibility to lead off, and Gonzalez said he gave the idea some consideration before ultimately dismissing it.

Marlins juggle lineup with Hanley out

Fredi Gonzalez has juggled his lineup with superstar shortstop Hanley Ramirez (bruised hand/wrist) out tonight against the Mets. He's moving Cameron Maybin up from the eighth spot and John Baker will now be hitting third.

Mets to lineup to come.

Posted by Manny Navarro at 3:45 PM in The Lineup | Permalink | Comments


Hanley Ramirez doesn't have any broken bones. But his right hand and wrist were noticeably swollen after being hit by a John Maine pitch and Ramirez said he definitely won't play Tuesday. Wednesday appears to be the earliest that he would return to the lineup, but with the Mets sending out Johan Santana that day, don't count on it.

While he wasn't faulting Maine, Ramirez said he's seeing more inside pitches this season because pitchers "know what's going to happen if I throw my hands out front."


NEW YORK -- The Marlins are likely breathing a sigh of relief after X-rays taken of Hanley Ramirez's right hand were negative. Ramirez was hit by a John Maine pitch in the first inning and left the game.

The Marlins are listing Ramirez as day-to-day with a sore right hand.